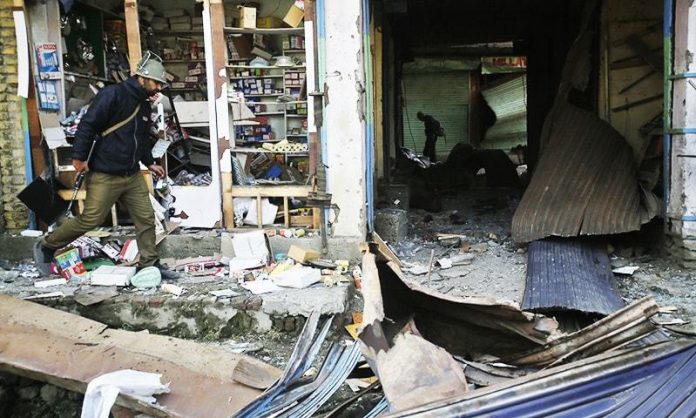 SRINAGAR: Four Indian policemen were killed on Saturday in a bomb blast set off by suspected militants in India-held Kashmir, police and reports said, marking a deadly start to the new year in the restive valley.
They were on patrol when the improvised explosive device (IED) exploded in Sopore, some 50 kilometres (30 miles) away from the main city of Srinagar.
Jammu and Kashmir police took to twitter to confirm the blast and number of policemen killed in the blast.
The bomb was planted by militants near a shop amid a strike called by separatists, the Press Trust of India and other local media said. The latest incident comes during a spike in violence in the disputed region which is claimed in full by India and Pakistan.
Last week four Indian soldiers were killed in an attack by armed militants who stormed a paramilitary camp outside Srinagar.
Since 1989, rebel groups have been fighting roughly half a million Indian soldiers deployed in the territory, seeking independence for the former Himalayan kingdom or its merger with neighbouring Pakistan.
The fighting has left tens of thousands, mostly civilians, dead. Last year 206 suspected militants, 57 civilians and 78 Indian security forces personnel were killed, making it the deadliest year in a decade.