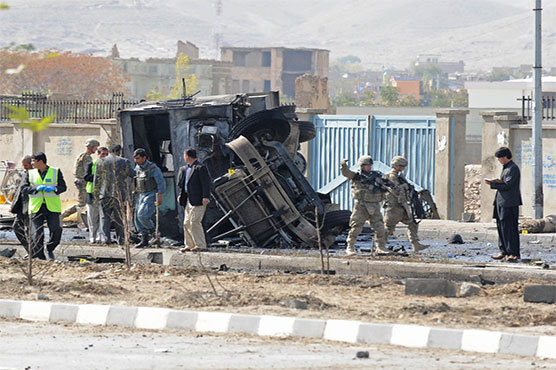 KABUL: Three US troops and a military contractor were killed in a roadside explosion Monday in the deadliest attack on American forces this year, casting a shadow over ongoing peace talks with the Taliban, which claimed responsibility for the attack.
The blast near Bagram Air Base is the latest to hit American forces amid an ongoing, US-led drive to forge a peace deal in Afghanistan, more than 17 years after the Taliban were ousted.
According to the NATO-led Resolute Support mission in the country, the troops convoy hit a roadside bomb that also wounded three US troops.
Earlier, the Taliban claimed to have conducted the attack when a suicide bomber detonated his vehicle filled with explosives, saying “multiple invaders” had been killed. They added that one armoured personnel carrier had been “completely destroyed”.
Bagram, America s largest air base in Afghanistan, is located about 50 kilometres (30 miles) north of Kabul.
The explosion took place around 5:40 pm (1310 GMT), according to Salim Noori, spokesman for police in the province of Parwan, which is home to Bagram.
The car bomb targeted a convoy of coalition soldiers, he told foreign news agency.
Bagram district governor Abdul Shakoor Quddusi said a car bomber attacked an armoured vehicle carrying foreign forces close to a gate to the base.
Officials did not immediately release the names of those killed, in line with standard policy pending notification of next of kin, or the nationality of the contractor.
“The wounded service members were evacuated and are receiving medical care,” Resolute Support said in a statement.
Democratic presidential hopeful Beto O Rourke tweeted his condolences, saying: “Our thoughts are with the families of the three service members killed today in Afghanistan.”
The blast brings to seven the number of US troops killed in Afghanistan so far this year, compared to 12 killed in all of 2018.
Still, American casualties have fallen dramatically since the end of 2014, when Afghan forces took over from US-led NATO combat troops to secure the country.
The US now has some 14,000 troops in Afghanistan — down from a peak of around 100,000 — most of them deployed to train and advise Afghan counterparts.
Nearly 2,300 American soldiers have died and more than 20,400 have been wounded in the country since a US-led coalition ousted the Taliban in 2001.
While parts of Afghanistan including Kabul have experienced something of a lull in attacks in recent weeks, US and Afghan forces have stepped up attacks on the Taliban across the country.
Afghans, meanwhile, are on high alert for a new round of violence when the militants kick off their expected spring offensive.
They typically declare a new fighting season as winter snows melt, and have in the past sought to gain control of district centres and to target government facilities.
Taliban leaders are set to meet with Afghan officials in Qatar next week for a fresh round of talks as the US tries to broker a peace deal.
Last week, US envoy Zalmay Khalilzad called for a “comprehensive and inclusive” intra-Afghan dialogue between the government, women, youth and civil society.
The Taliban has until now refused to meet with the Kabul government, accusing it of being a puppet regime.
The diplomatic spat between Washington and Kabul came to a head last month when Afghanistan s national security advisor Hamdullah Mohib accused Khalilzad of a lack of “transparency”, even suggesting the Afghan-born envoy wanted to be “viceroy” of his native country.
Washington reacted furiously, with US officials reportedly refusing to attend meetings in which Mohib was present. The outspoken advisor visited eastern provinces when Khalilzad was in Kabul. …Agencies