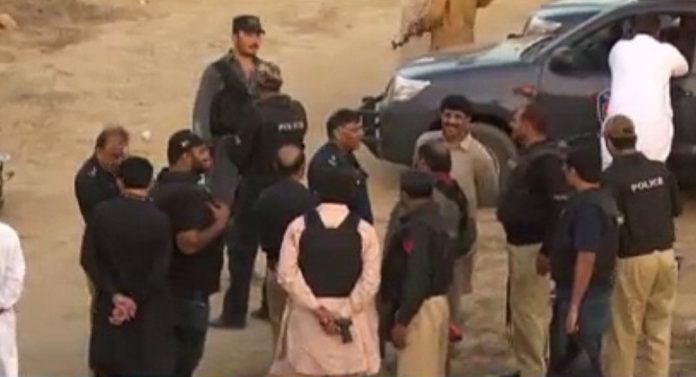 KARACHI: Police on Saturday claimed to have killed four terrorists in a shootout in the outskirts of Karachi.
SSP Malir Rao Anwar claimed that a “gunman” of former Taliban chief Hakeemullah Mehsood and a terrorist affiliated with the proscribed Lashkar-e-Jhangvi (LeJ)were among those killed in exchange of fire with police in Shah Latif Khaskheli Goth.
The alleged LeJ member, he said, was identified as Molvi Ishaq.
He said the shootout took place during a raid conducted on a tip off about presence of terrorists in the area.
The SSP said the terrorists lobbed a hand grenade at police before being shot dead.
According to Rao Anwar, the terrorists were involved in attacks on Karachi airport, Mehran Airbase, police, and Rangers .
Three pistols, a motorbike and hand grenades were recovered from the possession of the suspects.
The police were carrying out a search operation in the area following the shootout.