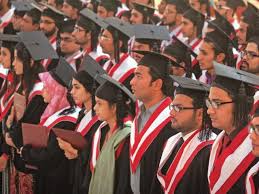 PESHAWAR: Khyber Pakhtunkhwa Advisor to CM for Information and Higher Education, Mushtaq Ahmed Ghani has disclosed that two-year BA, BSc graduation will soon be replaced with four-year BS Program in all universities and colleges of the province.
Speaking as chief guest at the Convocation of Government Post Graduate Girls College, Mandian, Abbottabad, on Saturday, he said that the hi-tech education model will later be replicated in other universities of the province at an estimated cost of nine billion rupees.
He said measures were also underway to introduce hi-tech higher education of international standard and a consortium had been constituted to start first educational session in one of the seven selected disciplines from the next academic year at Haripur University with technical assistance and collaboration of a world reputed Austrian University.
He said that this step was taken by the present provincial government under its education reforms agenda that was set by the PTI Chairman, Imran Khan who kept in view the present and future job market as well as exploitation of the mineral and other natural resources and potential for hydro power generation that is available in Khyber Pakhtunkhwa and other parts of Pakistan.
The Convocation ceremony was also addressed by the Vice Chancellor, Hazara University, Professor Dr. Muhammad Idrees and Principal of the College, Professor Qaisira Perveen while registrar of the university Professor Dr. Manzoor Shah, Controller Examination, Dr. Azhar Shah, officials of the higher Education Department, Peshawar, the faculty members and large number of parents and teachers attended the function.
Highlighting issues of education sector in KP and the provincial Government’s endeavors to overcome them, Mushtaq Ghani said that 70 percent of all new schools and colleges were being established for women, which was ample proof of the fact that the present PTI Government was according priority to women education.
He said that heads of all colleges of the province had been empowered to hire teachers from open market on temporary basis until availability of permanent lecturers from the Public Service Commission. He assured that all required funds would be provided by the provincial government for this purpose.
He said that the party leadership was ambitious for the ongoing reforms agenda especially in education and health sectors and the PTI’s provincial government had so far achieved numerous goals in this connection.