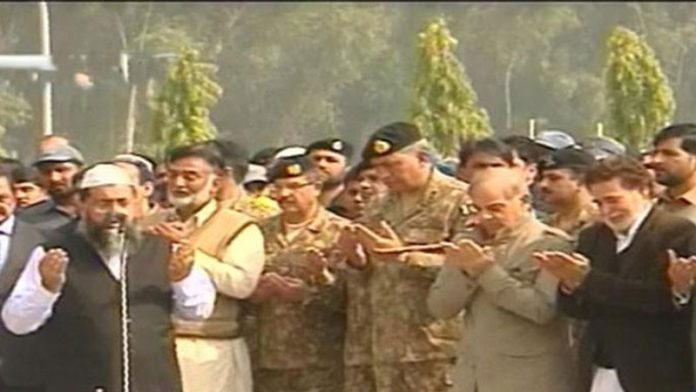 LAHORE: Funeral prayer of seven police officers including DIG Traffic Captain (R) Syed Ahmad Mubeen and SSP Operations Zahid Mahmood Gondal was held in Elite Police Training Center in Lahore on Tuesday.
The funeral prayer was attended among others by Punjab Governor Malik Muhammad Rafique Rajwana, Punjab Chief Minister Muhammad Shahbaz Sharif, Punjab Law Minister Rana Sanaullah Khan, Corps Commander Lahore Lt. Gen. Sadiq Ali and other top civilian and police officials. Bodies of the martyred will later sent to their ancestral areas for burial.
At least 13 people were martyred and 40 injured in a bomb blast at Chairing Cross in front of the Punjab Assembly in Lahore on Monday evening.
DIG Traffic Ahmed Mobeen and SSP Traffic Zahid Gondal were also martyred in the incident. The blast occurred when a protest rally was passing near the spot. An emergency has been declared in all the hospitals of the city. The injured have been shifted to Mayo hospital and Ganga Ram Hospital.
In their separate messages, President and Prime Minister said such dastardly acts cannot shake the resolve of the nation. Affirming the state’s resolve against the menace of terrorism, they said this scourge will be rooted out.
Prime Minister said today a tragedy has struck Lahore and alongside innocent civilians, we have lost two of our own brave Police officers Captain Mubeen and Zahid Gondal.
Nawaz Sharif said they will be vindicated in our constant struggle for peace and security, and honoured as martyrs.
The Prime Minister directed to provide best medical facilities to the injured and victims of the blast.
Chief Justice of Pakistan Mr. Justice Mian Saqib Nisar has strongly condemned the terrorist attack in Lahore that claimed the lives of innocent citizens including police personnel and officers, besides causing injuries to many people.
In his message, the Chief Justice of Pakistan has offered his heartfelt condolences to the bereaved families and prayed for speedy recovery of injured people.
Senate Chairman, Raza Rabbani, Interior Minister Chaudhary Nisar Ali Khan, Punjab Chief Minister Shahbaz Sharif and others have also condemned the blast.
Chief of Army Staff General Qamar Javed Bajwa while condemning the terrorist act at Lahore today has expressed his grief for loss of innocent lives.
He instructed local army commander and intelligence agencies to provide all necessary assistance to civil administration in evacuation of injured to hospitals and also to apprehend those responsible for this heinous act.
Chief Minister Punjab, Muhammad Shahbaz Sharif has announced to observe one day mourning tomorrow across the province in grief of loss of precious lives in the attack.