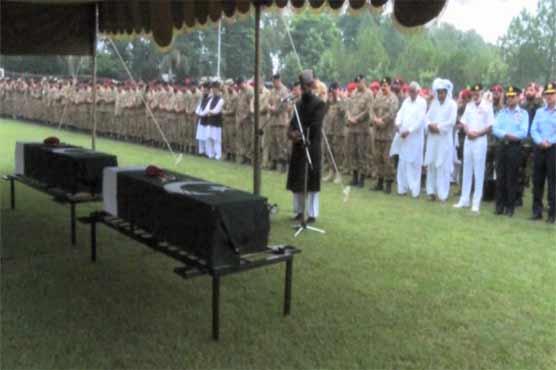 RAWALPINDI: Funeral prayers of ten martyrs of Mansehra helicopter crash was offered today (Monday) in Rawalpindi.
The funeral prayer of Dr Muzammil alongwith ten others was offered in Chaklala Garrison and was attended by Chief of Army Staff (COAS) General Raheel Sharif, Chairman Joint Chiefs of Staff Committee (JCSC) General Rashad Mahmood, Chief of Naval Staff as well as Chief of Air Staff along with a large number of relatives and high ranking serving and retired officers, says ISPR.
General Rashad Mahmood also met the relatives of the martyrs after the funeral prayer.
At least 12 military men including three doctors and paramedics from the medical wing lost their lives when the helicopter suddenly went down on Thursday due to bad weather in the district of Mansehra of Khyber Pakhtunkhwa province.

The team was traveling to the northern city of Gilgit from Rawalpindi to evacuate a sick soldier.