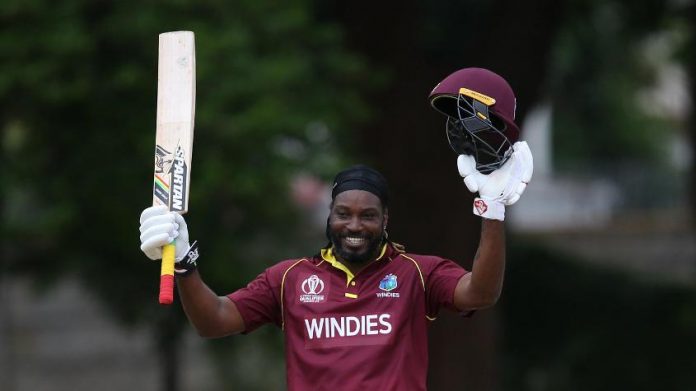 HARARE: Chris Gayle hammered his 23rd one-day international hundred to lead the West Indies to victory in their opening World Cup qualifier against the United Arab Emirates on Tuesday, while Afghanistan collapsed to defeat by Zimbabwe.
Windies opening batsman Gayle struck 11 sixes in a blistering 91-ball 123 in Harare as the two-time World Cup winners racked up 357-4 in their Group A clash, with the UAE falling 60 runs short.
Afghanistan’s hopes of taking one of the last two places for next year’s tournament in England and Wales are hanging by a thread, after following Sunday’s shock loss to Scotland with an agonising two-run defeat by the hosts.
Elsewhere, Ireland and Scotland both made it two wins from two by seeing off Papua New Guinea and Hong Kong respectively.
The 38-year-old Gayle became only the third batsman in ODI history after Hashim Amla and Sachin Tendulkar to score hundreds against 11 different countries.
After captain Jason Holder elected to bat first, Gayle quickly got into his stride alongside big-hitting youngster Evin Lewis in an opening partnership of 88.
Lewis fell for 31, but Shimron Hetmyer outdid even Gayle, plundering 127 to score his maiden international ton.
The UAE, who had beaten Papua New Guinea in their opening match, never threatened a famous run chase after slipping to 69-3, but an excellent unbeaten 112 from Rameez Shahzad carried them to a respectable 297-6.
Windies skipper Holder ensured his side got off to a winning start, taking 5-53 after fast bowler Sheldon Cottrell’s day was cut short by injury.
Meanwhile, Afghanistan came into the qualifiers as favourites to qualify alongside the West Indies, but will now probably need five consecutive wins to have any chance of reaching a second straight World Cup.
With the defeats against Scotland and Zimbabwe set to count in the Super Six stage, should Afghanistan get there, their chances are all but over.
Rashid Khan and co put in a much-improved display with the ball as they limited Zimbabwe to 196 all out in Bulawayo.
Teenage stand-in captain Khan took 3-38 to reach 90 wickets in ODIs, while 16-year-old fellow leg-spinner Mujeeb Ur Rahman finished with 3-49.
But Brendan Taylor’s 89 and 60 from Sikandar Raza proved crucial as Zimbabwe won in dramatic fashion.
At 156-3 with almost 17 overs remaining, Afghanistan were cruising to victory, but the pressure proved too much as they lost six wickets for only 21 runs.
Last-wicket pair Dawlat Zadran and Shapoor Zadran dragged the Asian outfit to within four runs of their target heading into the final over, but the latter was caught behind off Brian Vitori to secure Zimbabwe’s second win.
Ireland and Scotland look set to challenge the West Indies and Zimbabwe for qualification, after both moved to the top of their groups.
Captain William Porterfield’s 111 steered Ireland to a four-wicket win over Papua New Guinea, who had managed 235 thanks to a stunning 151 from opener Tony Ura.
Scotland survived a middle-order collapse to successfully chase down 92 to beat Hong Kong, with skipper Kyle Coetzer making 41 not out. – APP