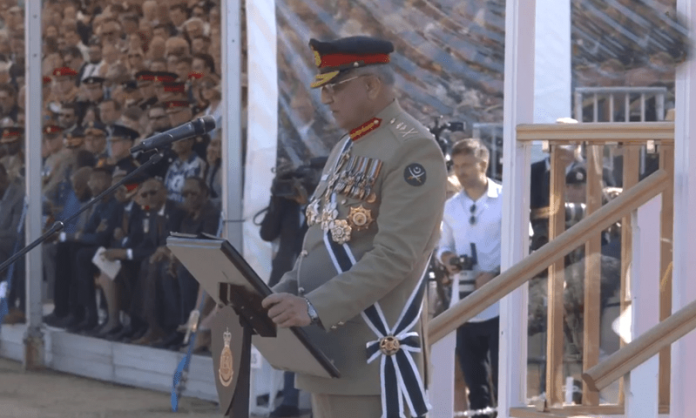 As Pakistan’s first high-ranking army official to attend the parade, Bajwa was greeted by British officials. He also observed a march-past of cadets.

International cadets who have completed the five-year long training at the academy were presented with an honourable badge. Two Pakistani cadets also completed the course.

Addressing the ceremony, Bajwa congratulated the graduating candidates and their families for completing the training.

“It is indeed a unique honour for me to represent my country,” he said. “You have the finest decree and this place created some of the best military leaders that the world has ever seen.”

Citing that two Pakistani candidates were among the graduates, he noted that he was as proud of the rest of the cadets as he was for the two Pakistanis.

Bajwa also talked about Pakistan-UK relationship and pointed out that it was based on mutual respect and shared values “which have been carefully nurtured by the two nations for many decades.”

He hoped that the bilateral relationship would grow to new heights.

“Correct decision-making demands competence and confidence which comes with high class education and rigorous training,” he told the cadets. “Amid fourth industrial revolution, new technology and artillery led by artificial intelligence are fundamentally altering the battlefield.”

According to him, the battlefield of tomorrow would be marked by extreme precision and transparency which would be challenging for military leaders especially young ones.

Matters of mutual interests including the Afghan Peace Process, security and defence cooperation as well as evolving global geostrategic environment were discussed.

Both Nicholas and Bajwa also during the meeting agreed on strengthening bilateral security and defense cooperation between the two armies.