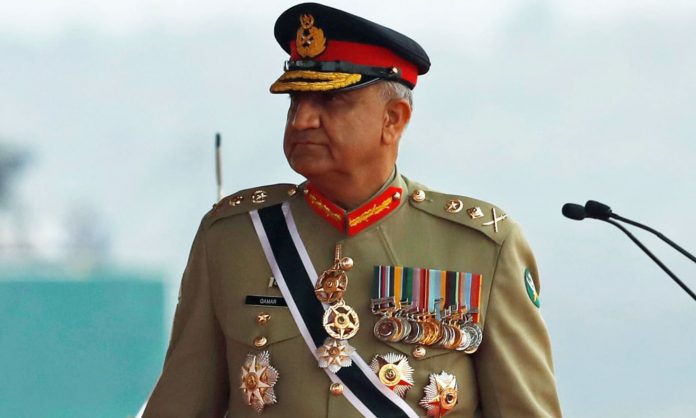 ISLAMABAD: All eyes are on the Supreme Court as it reconvened again on Thursday – a day after the chief justice-led bench grilled the country’s top law official over the extension/reappointment of incumbent army chief General Qamar Javed Bajwa.
General Bajwa is set to retire at midnight Thursday if the government fails to satisfy the apex court.
The three-judge bench headed by Justice Khosa announced that the court will announce a short order later today. He further instructed that the “parliament should pass legislation on the matter within six months”.
“If the legislation is not passed during the given time, the appointment will become illegal.”
Announcing an adjournment till 1 pm, the apex court further instructed the government to correct the notification and the summary. “Make the required changes and bring it to the court. We will announce the judgement today,” said the chief justice.
Justice Syed Mansoor Ali Shah also observed that the parliament has to remove the ambiguity present in the Army Act. “There is no better forum than the parliament to fix the system.”
Justice Mazhar Alam Khan Miankhel further said that it should also be specified if the tenure would be extended or reappointment will be made in the future.
At the start of the day’s proceedings at 9:30 am, the court directed the AG to submit documents related to the retirement Gen (retd) Raheel Sharif and the extension of Gen (retd) Ashfaq Pervez Kiyani. A brief adjournment then took place to provide time to the attorney general for submission of said documents.
“The documents will be presented in the court shortly. The army chief was reappointed as per Article 243,” said AG Anwar.
Going through the documents after resuming the hearing, the chief justice said that the documents do not mention who granted an extension to General Kiyani and neither do the documents mention “under which law he was given the extension”.
“There should not be any confusion over such an important post.”
“We want to see what is written on those documents. We have been told that a general never retires. If a general never retire then there must be no pension and if there is no retirement for generals, then what is their mode of earnings,” questioned the chief justice.
“How is the appointment that took place today different from the previous ones? You will have to convince us, how the latest appointment is accurate,” continued Justice Khosa.
“Extensions were happening in the past but no one took notice of it. No one is watching what is happening in cantonments. Under which law does this practice continuing? Now a constitutional institution is reviewing this matter. The appointment procedure should be clearly written on the constitutional post,” said the CJP.
Justice Mansoor Ali Shah said that the appointment of an army chief should be as per the law and noted that the law does not mention a tenure of three years.
The chief justice added that “Article 243 does not mention the three-year duration”.
“If an extraordinary general is found tomorrow, will he be given an of 30 years?” said Justice Khosa and added that the government may also want to appoint the next army chief for a one year tenure,
Regretting that no one had examined the law while extensions were being granted, Justice Khosa said there is no check on what is happening within the cantonments.
“A constitutional institution is now examining the matter.”
Referring to the instructions for new legislation to be drafted in this regard, the chief justice said: “We are not telling you to pass the legislation immediately. A law which has not been drafted for 72 years can not be made in a hurry.”