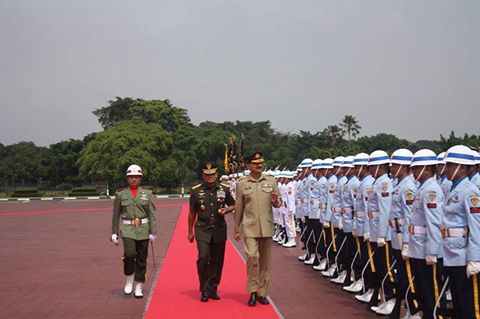 RAWALPINDI: Chairman Joint Chiefs of Staff Committee (CJCSC) General Rashad Mahmood met Indonesian Chief of Defence Forces (CDF) General Gatot Nurmantyo during his visit to Indonesia.
General Rashad Mahmood was presented the Guard of Honour upon his arrival at Headquarter Tentara Nasional Indonesia (TNI).
According to a press release by Inter Services Public Relations (ISPR), issues of mutual cooperation, bilateral interest and geo-strategic situation were discussed in the meeting.
“Both dignitaries dilated upon measures to enhance cooperation between the Armed Forces,” ISPR stated.
The Indonesian defence forces chief acknowledged the sacrifices rendered by the armed forces of Pakistan in the war against terrorism.
ISPR stated, “CJCSC also called on General (Retd) Wiranto, Coordinating Minister for Political, Legal and Security Affairs of Indonesia”.