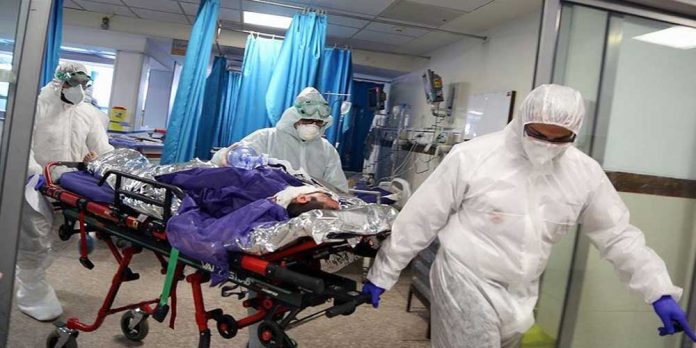 GENEVA: Global coronavirus cases surpassed 5 million on Wednesday, with Latin America overtaking the United States and Europe in the past week to report the largest portion of new daily cases globally.
It represents a new phase in the virus’ spread, which initially peaked in China in February, before large-scale outbreaks followed in Europe and the United States.
Latin America accounted for around a third of the 91,000 cases reported earlier this week. Europe and the United States each accounted for just over 20%.
A large number of those new cases came from Brazil, which recently surpassed Germany, France and the United Kingdom to become the third-largest outbreak in the world, behind the United States and Russia.
Cases in Brazil are now rising at a daily pace second only to the United States.
The first 41 cases of coronavirus were confirmed in Wuhan, China, on Jan. 10 and it took the world until April 1 to reach its first million cases. Since then, about 1 million new cases are reported every two weeks, according to a Reuters tally.
At more than 5 million cases, the virus has infected more people in under six months than the annual total of severe flu cases, which the World Health Organization estimates is around 3 million to 5 million globally.
The pandemic has claimed over 326,000 lives, though the true number is thought to be higher as testing is still limited and many countries do not include fatalities outside of hospitals. Over half of the total fatalities have been recorded in Europe.
Despite the continued increase in cases, many countries are opening schools and workplaces following weeks of lockdown that have stemmed the spread.
Financial markets have also been boosted slightly by promising early results from the first U.S. vaccine trial in humans.
The World Health Organization said Wednesday it had registered a new daily record number of COVID-19 cases as it crossed the “tragic milestone” of five million total infections.
The UN agency s chief Tedros Adhanom Ghebreyesus said that on Tuesday, there were “106,000 cases reported to WHO — the most in a single day since the outbreak began” in December.
The WHO was also getting to grips with US President Donald Trump s reform ultimatum, giving the organisation 30 days to overhaul its operations otherwise its biggest contributor would freeze its funding and consider pulling out altogether.
The Geneva-based WHO s coronavirus disease dashboard said that on Tuesday, 106,662 confirmed cases had been reported to the agency from around the world.
The new figures come after states around the world have been dramatically ramping up their testing programmes.
And the pandemic is still unfolding.
“We still have a long way to go in this pandemic,” Tedros told a virtual press conference as his agency warned of rising infection figures in poorer countries.
More than five million cases of the novel coronavirus have been registered in total since the outbreak first emerged in China last December, according to a tally from official sources compiled by AFP.
WHO emergencies director Michael Ryan said the five million cases mark would be a “tragic milestone”.
Tedros added: “We re very concerned about the rising numbers of cases in low- and middle-income countries.”
More than 325,000 people have lost their lives, according to the AFP tally. …Agencies