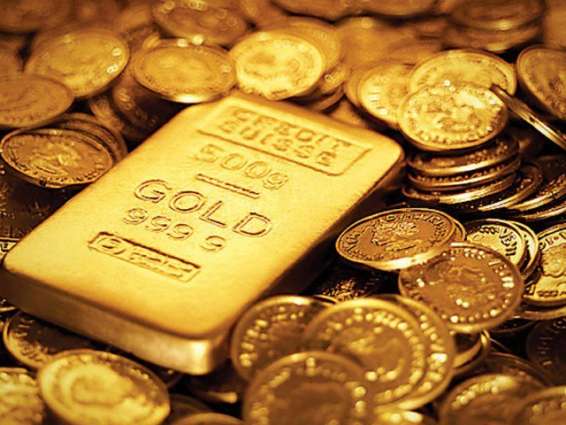 KARACHI: Domestic gold rate has hit an all-time high peak of Rs72,000 per tola, resulting in severe consequences for goldsmiths across Pakistan.
Pakistan’s rupee has weakened to a record low in an apparent devaluation, a few days after the country secured a bailout from the International Monetary Fund (IMF) that investors speculate includes tough conditions to reform the economy, including the rate of the US dollar.
With the spike in the rate of the US dollar against rupee, analysts predict that the gold rate would rise further.
Spot gold fell 0.8% to $1,276.25 per ounce as of 1:46 p.m. EDT (1746 GMT) on Friday, having dropped to its lowest since May 3 at $1,274.51 earlier in the session.
The dollar advanced on the back of strong U.S. economic data, putting the metal on track for its biggest weekly decline in a month.
The metal is down 0.7% for the week so far, which could be its biggest weekly decline since April 19.
U.S. gold futures settled down 0.82% at $1,275.70 an ounce.
“The dollar has strengthened due to relatively strong U.S. economic reports and little relaxation in geo-political tensions, all these combined has put downward pressure on gold prices,” said Jeff Klearman, portfolio manager at Granite Shares.
The dollar index gained, holding near a two-week high against a basket of currencies, making gold more expensive for holders of other currencies.
U.S. consumer sentiment jumped to a 15-year high in early May amid growing confidence over the economy’s outlook, data showed on Friday.
Spot gold fell 0.8% on Thursday, its biggest one-day percentage decline since mid-April, as strong economic data from the United States spurred investors towards riskier assets.
The falls in gold over the past couple of sessions has dented the technical picture for the metal, analysts said.
“Bullion prices had broken the bearish trendline that had marked the last few months,” Carlo Alberto De Casa, chief analyst with ActivTrades, wrote in a note.
“A clear recovery to the $1,300 level, and prices holding above this psychological threshold, would confirm the supportive scenario seen in the last two weeks, while a fall below $1,280 would be seen as a negative element.”
Meanwhile, world share markets pulled back as trade tensions were renewed after Chinese media took a hardline approach to the tariff dispute between the United States and China.
“Despite the risk-off sentiment in the market we are not seeing any underline support coming (for gold). However the geo-political tensions with Iran and ongoing trade talks with China could provide some support going forward,” said Alex Turro, market strategist at RJO Futures.
Among other metals, silver dropped 1% to $14.41 an ounce, after hitting its lowest since Dec. 6 at $14.38 an ounce. Silver is also on track for a decline of more than 2% for the week, its biggest since March 1.
Platinum dipped 1.9% to $813.50 per ounce, having hit a more than two-month low at $812.50 earlier in the session.
Palladium slipped 1.4% to $1,312.51 an ounce. The metal used in catalytic converters in car exhaust systems has slumped about 19% from a record high of $1,620.53 hit in March.
Both platinum and palladium are set to record weekly falls, with platinum on course for its biggest such drop since mid-August 2018.
The prevailing value of gold in Pakistan and other countries of the world has always been a much sought-after item both for men and women of all ages. Gold rates vary daily as it is one of the most loved and precious elements in the world. This great value of the metal is owed not only to its elegance and glamour but also its charm.