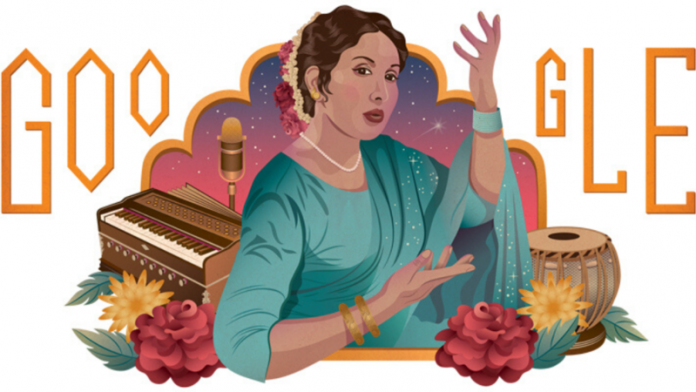 ISLAMABAD: Google honoured acclaimed singer Iqbal Bano with her very own Google Doodle on what would have been her 81st birthday.
The illustration, designed by Karachi-based guest artist Samya Arif, celebrates the the classical singer famous for her renditions of ghazal, nazm and other classical forms, as well as music for film and patriotic songs. She passed away in 2009 in Lahore.
Iqbal Bano was born in 1938 in Delhi and studied with Ustad Chand Khan, a master of classical Indian vocals, and began singing on All India Radio as a teenager. She moved to Pakistan in 1952 and sang on Radio Pakistan, provided vocals as a playback singer for popular movies and attracted large crowds to her live concerts. She was awarded the Pride of Performance Award in 1974.
During the regime of General Ziaul Haq, Iqbal Bano sang Faiz Ahmad Faiz’s poetry in a black sari before a crowd of 50,000 at a Lahore stadium in 1985, becoming a symbol of resistance. She was subsequently banned from performing or appearing on TV. Faiz had written the poem critical of military rule while in prison and the sari had been declared “un-Islamic”.
Google Doodle has also honoured notable Pakistani figures in the past, such as Nusrat Fateh Ali khan, Abdul Sattar Edhi, Noor Jehan, Waheed Murad, Nazia Hassan and Fatima Surayya Bajia.