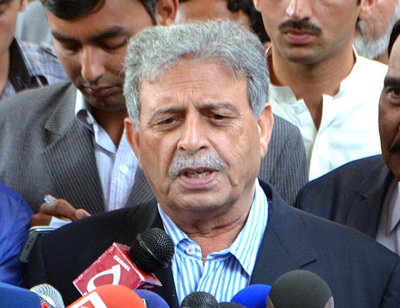 ISLAMABAD: Minister for Defence Production Rana Tanveer Hussain Tuesday highlighted importance of overseas Pakistanis and declared them the backbone of national economy.
Addressing the representatives of Pakistanis based in Cape Town, South Africa, he said the government was fully determined to give right of vote to the overseas Pakistanis.
Pakistan Muslim League-Nawaz (PML-N) government had accorded top most priority to the welfare of all Pakistanis living abroad, Tanveer said.
According to a press release issued here, the minister said that remittances received from Pakistanis residing in South Africa were playing an important role in strengthening the national economy.
He reiterated that the government had taken various steps for the future of Pakistan.
He said the economy suffered great loss due to energy crisis, the menace of terrorism and situation in Karachi, but “now by the grace of Allah Almighty we have successfully tackled these challenges”.
The Operation Zarb-e-Azb, he said, had been helpful in combating terrorism in Federally Administered Tribal Areas, adding that the whole nation was united and it supported the government to completely eliminate terrorists from the Pakistani soil.
Speaking about economic situation, Rana Tanveer said that the Gross Domestic Product growth was 2.2 percent in 2013 and now it was 4.5 percent whereas the government had set the target to take it 7 percent, which would be achieved in next two years.
“Pakistan Stock Exchanges have crossed 40,000 points limit which is high achievement of PML-N government,” the minister said and added that the China Pakistan Economic Corridor was a game changer for Pakistan’s economy.
The minister praised the peaceful Pakistani community living in South Africa and urged them to increase people-to-people contact and trade between the two countries.
Pakistanis based in South Africa expressed gratitude to the government of Pakistan for effectively safeguarding the interests of the community.
They appreciated the government for promptly resolving issues faced by the community, especially issuance of Machine Readable Passports to all categories of applicants.
Representatives of Pakistani community congratulated Rana Tanveer Hussain for success of the PML-N in by-elections in Chichawatni, Jhelum and Burewala. …APP