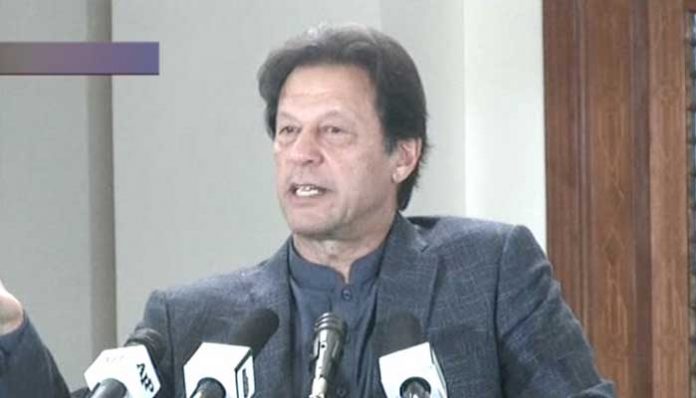 ISLAMABAD: Prime Minister Imran Khan on Wednesday said that the efforts were underway to promote tax culture in the country and government’s policies will bring stability in the country.
Addressing Sales and Income Tax Refund Cheques distributing ceremony in Islamabad on Wednesday, he said that the country was facing US$19 billlion current account deficit when Pakistan Tehreek-e-Insaf (PTI) came into power but today the Pakistan’s current account turned into surplus.
The prime minister said that the local currency is stabilizing by grace of God almighty and stock market is also flourishing, adding that the increasing confidence of investors is welcoming.
Imran Khan went on to say that China lifted up millions out of poverty line due to its long-term policy, adding that not only India but Bangladesh has also left us behind in GDP growth.
“No one has ever stressed over long-term policy in Pakistan but the long term policy PTI government is devising will bring economic stability in the country,” he said.
Khan said: “We have gone through a very difficult period where we had to bring stability in our economy. Now you will see our long term policies on trade, investment, different textile, e-commerce and various other areas.”
He said that the government is employing all its efforts in supporting and promoting our business community specially promoting industrialization.
The premier further said the country cannot be run without taxes and the business community should pay taxes otherwise we won’t be able to compete in the world.
“Raising the living standard of the poor people is only possible through tax collection,” Khan said and added China is an example for us, their policies have vision, stability and certainty. They have emphasized on human development.
The prime minister said: “Those who think that the country will work without paying the taxes, let me tell you, this might be possible in fairy tales but not in real life. The reason why Pakistan’s human development index is going down is because we don’t invest on our human resource.”