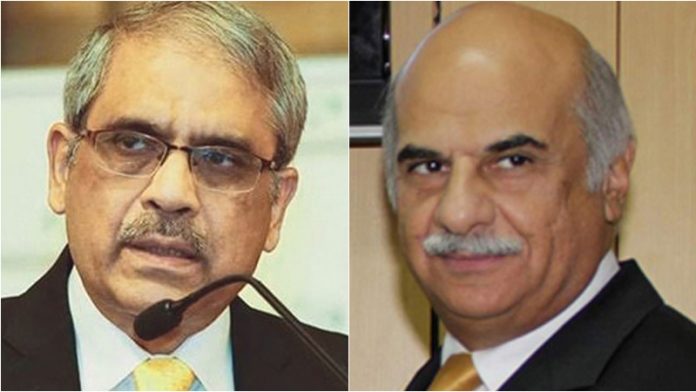 ISLAMABAD: Pakistan’s government has fired the governor of the central bank and the chairman of the tax collection body, two senior government officials told foreign news agency on Friday, in another setback to efforts to tackle economic turmoil.
The removal of the two comes only weeks after Finance Minister Asad Umar was asked to step down amid vital bailout negotiations with the International Monetary Fund, suggesting the government wants to overhaul its financial team amid weakening growth rates and soaring inflation.
“The government has decided to remove the governor of the State Bank and the chairman of FBR,” a Finance Ministry source said, referring to State Bank of Pakistan Chairman Tariq Bajwa and Federal Bureau of Revenue Chairman Jahanzeb Khan. A source at the prime minister’s office confirmed both had been sacked.
Central bank spokesman Abid Qamar told foreign news agency that Bajwa had “resigned”, and that it was unclear who would replace him.
Bajwa, appointed governor in 2017 during the tenure of the previous government, was one of the key figures in Pakistan’s ongoing bailout negotiations with the IMF.
He was also seen to be close to Ishaq Dar, the former finance minister who appointed him and who championed a “strong rupee” policy that many analysts blame for Pakistan’s current economic woes, including ballooning budget and current account deficits.
The IMF is pushing Pakistan to embrace a more flexible rupee policy to end repeated boom-and-bust cycles, with many analysts arguing that the local currency is overvalued.
The government of premier Imran Khan has also been frustrated by the low tax collection rates during its first year in office, with the disappointing figures threatening Khan’s promises to build a welfare state for the poor.
The central bank in March cut its economic growth estimates, forecasting the economy would expand 3.5 to 4 percent in the 12 months to the end of June, well short of a government target of 6.2 percent. The IMF paints a gloomier picture, predicting growth of 2.9 percent in 2019 and 2.8 percent next year.
Pakistan’s consumer price inflation in March rose to its highest since November 2013, hitting 9.41 percent year-on-year, before easing to 8.82 percent in April. …Agencies