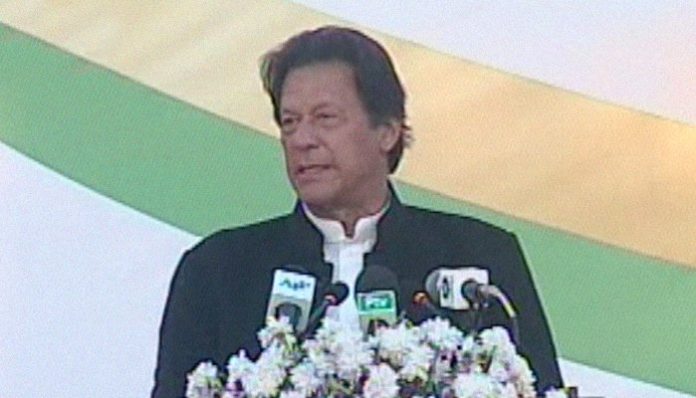 ISLAMABAD: Prime Minister Imran Khan says government is committed to facilitate business community in the country.
Addressing a ceremony of Pakistan Stock Exchange in Karachi on Friday, he said we want to put the country on the track of economic development.
The Prime Minister said government has achieved a number of economic targets during the current year.
He said economic team of the government will remain in touch with business community to facilitate them and all obstacles are being removed in ease of doing business.
The Prime Minster however said the inflation rate is currently high and it will bring down in coming months.
He said that 2019 was our year of reforms and these reforms have started producing results that will be much more visible in the next year.
The premier said the need of the hour was to incentivise the industries, help the business community, and focus on the small and medium-sized businesses.
He said his leadership would keep reminding people about the previous governments and their policies. “People ask me why do I bash the past governments? It’s because we did not get a stable economy and our government is trying it’s best to overcome economic problems,” he added.
He added that his adviser on finance and revenue, Dr Abdul Hafeez Shaikh, had informed people about the ruling Pakistan Tehreek-e-Insaf’s (PTI) efforts to bolster the economy. “A crucial problem was that the current account was in deficit, foreign exchange reserves had depleted, there were no dollars, there were debts worth Rs10 billion to be repaid, and a serious risk of the country defaulting,” he said.
“We had to take some hard steps so that the country wouldn’t default. All those who understand this issue know what would have happened [in case of a default] and we have seen that happening in the Latin American countries and Lebanon.
“Thank God that the rupee has become stable [and] the investor confidence returned. We have experienced hard times and entering into in 2020 with good hopes. 2020 will be the year of growth and we will incentivise the industries, help our business community, and focus on the small and medium-sized businesses,” he added.
The prime minister noted that he and his team discussed the economic issues and efforts with State Bank of Pakistan Governor Dr Reza Baqir and his adviser on commerce, textiles, industries, and investment, Abdul Razak Dawood, and talked about measures that would help the small and medium-sized businesses.
“The interest rate is high right now but InshAllah [God willing], we will reduce it,” he said. “We will focus on getting investments and try to give jobs to youth and create an atmosphere where economic growth will be possible.
“We have to help investors, help businesses, and focus on job creation.”
PM Imran also spoke of tourism as one of the most rapidly-growing industry, noting that it had “improved at a remarkable rate”.
He stressed again that his government would try to create jobs through this sector and that it would help Pakistan in providing employment to its people. “It will also play a role in bumping up our foreign reserves as foreign exchange is a given if tourism increases.
Noting that Condé Nast Traveler, a US-based luxury and lifestyle publication, had earlier this month named Pakistan as the number one place for tourists, he said the country would hopefully have an influx of more tourists.
“The internal tourism has increased to such an extent that local tourists cannot even find a hotel to stay sometimes. … We need to focus and plan on boosting this sector in the upcoming years.
“Nine million Pakistanis living abroad now want to come to their homeland for tourism during the vacations. We can also counter Islamophobia through tourism,” the premier said.