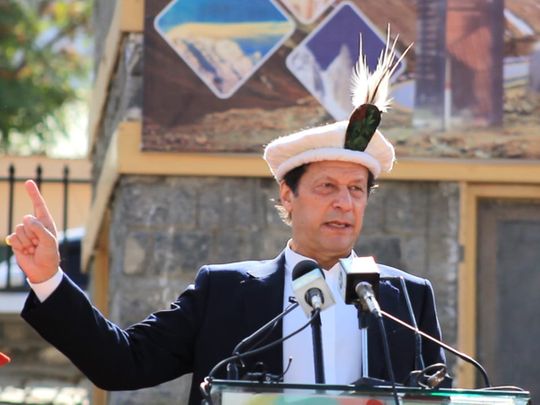 ISLAMABAD: Prime Minister Imran Khan announced granting the provisional-provincial status to Gilgit-Baltistan on Sunday as he arrived in the area to attend its 73rd Independence Day celebrations, Khyber News reported.

“One of the reasons for me coming to Gilgit-Baltistan is to announce that we have decided to grant Gilgit-Baltistan the provisional provincial status,” he said. “We have taken this decision keeping in mind the UN Security Council’s resolutions,” added the prime minister. PM Imran said that he could not announce or talk about the development packages for Gilgit-Baltistan since it would be a violation of the stated procedures as elections were about to take place in the area.

The prime minister said that one of the many reasons Gilgit-Baltistan remained backwards was because it was “cut off” from the rest of Pakistan. “Insha’Allah you will see in the coming days, our development plans will go there [backward areas],” he said.

PM Imran said that he could not stress enough the importance of a strong army for a nation’s security. “Pakistan is secure today because of its armed forces,” he said. “Our army is the main reason why we haven’t suffered the same fate as many other Muslim countries.”

He blamed India for promoting sectarian hate in Pakistan, saying that New Delhi was behind fanning hate between the Shia and Sunni sects in Pakistan. The prime minister felicitated Pakistan’s intelligence agencies for rendering ineffective India’s conspiracies to spread anarchy in the country.