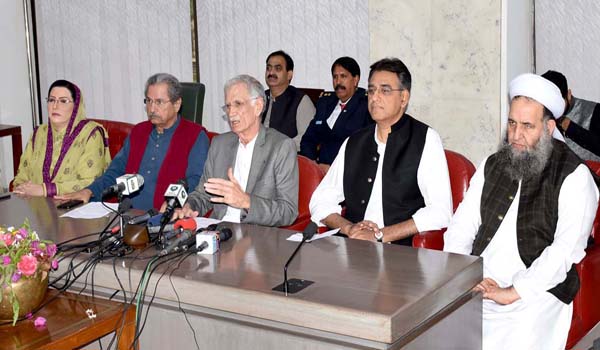 ISLAMABAD: The federal government on Sunday decided to negotiate with Jamiat-e-Ulema Islam chief Maulana Fazlur Rehman.
A meeting of the government’s negotiating committee took place at Senate Chairman Sadiq Sanjrani’s house.
Sanjrani reportedly told participants of the meeting that the government should seriously negotiate with Fazl to resolve the crisis.
“Fazlur Rehman has still not violated the agreement hence we should also talk to him,” Sanjrani was quoted as saying.
“We are always ready to negotiate,” said Defence Minister Pervaiz Khattak.
The two-day ultimatum that the JUI-F chief gave to Prime Minister Imran to resign has ended.
Fazl is expected to make an important announcement soon regarding the Azadi March.
Thousands of protesters have converged on the federal capital under the banner of the Azadi March, seeking to send packing Prime Minister Imran Khan packing.
The ‘Azadi’ March caravan, which set off from Sindh, left Punjab’s city Lahore on Wednesday and culminated its journey Thursday night in Islamabad.
Opposition leaders delivered fiery speeches against the PTI government on Friday, giving the prime minister a 48-hour ultimatum to resign.
JUI-F chief Maulana Fazlur Rehman gave Prime Minister Imran two days to step down, failing which the protesters may march on to the PM House, ‘force’ the prime minister to step down, and ‘arrest’ him.
The government announced on Saturday that they would approach the courts over Fazlur Rehman’s statements, accusing him of “instigating the people” and rallying them for ‘mutiny’.