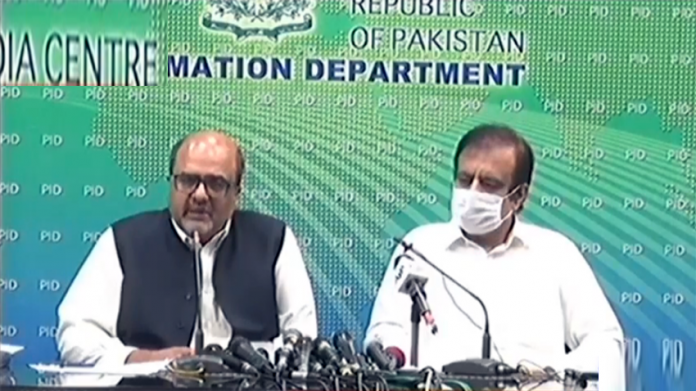 ISLAMABAD: The government has decided to refer the matter of Rs 29 billion subsidies to the National Accountability Bureau (NAB) and has announced that a reference will be sent on all subsidies given since 1985.
Special Assistant for Accountability Barrister Shahzad Akbar held a press conference in Islamabad along with Federal Minister for Information Shibli Faraz.
Informing the media about the government s decision during the press conference in Islamabad, Barrister Shahzad Akbar said that the Prime Minister has approved the action plan on the sugar crisis. The matter of Rs 29 billion subsidy is being referred to the National Accountability Bureau (NAB). References will be sent for all the subsidies given since 1985, along with all the subsidies matters in sugar industry of Sindh government, he added.
Barrister Shahzad Akbar revealed that a well known family had exported sugar to India in the 90s. He said that NAB is an independent body which will now look into the matter. The Federal Board of Revenue (FBR) should submit the recovery report to the government within 90 days.
Taking a clear and unequivocal stand, the Special Assistant said that no matter how powerful a person is or whether political party he belongs to, he has to answer and this is the manifesto and mandate of the Pakistan Tehreek-e-Insaf (PTI) government, he added.
He said that the Prime Minister had promised the nation to make the investigation report public and in the light of the report, it is clear that the regulator did not play its role, and the big players involved in the sugar crisis belongs to all political parties.
Shahzad Akbar said that evidence related to sales tax fraud has also been found. The low price of sugarcane and non-payment on time to the farmers is also a big problem. Apart from 9 mills, other sugar mills will also be audited.
He said that the FBR will process all anonymous transactions. He also criticized the former Prime Minister Shahid KhaqanAbbasi during his press conference, and advised him to read the inquiry report.
Talking on the occasion, Federal Minister for Information Shibli Faraz said that well known people are involved in the sugar mafia but protection of public interest is our top priority. Many people thought that the inquiry report would be left in the middle of nowhere because of the big names.
Shibli Faraz said that the Prime Minister was very serious about this very important issue. He immediately set up a commission of inquiry into the Sugar crisis and made its report public. The forensic audit of the inquiry report was also done on time.