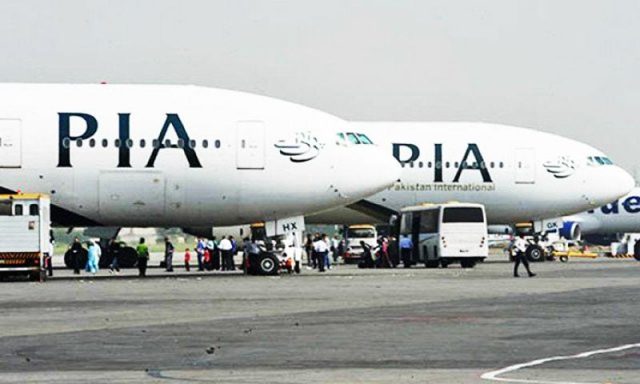 ISLAMABAD: The federal government has decided to take strict action against 262 pilots with fake licenses after the interim investigation report of the Karachi PIA crash investigation was presented in the National Assembly.
The government has decided to take stern action against all pilots who have been flying aircrafts on fake licenses. According to sources, the Civil Aviation Authority (CAA) has sought a list of these pilots and decided to immediately ground them till the completion of the inquiry.
Besides PIA, the pilots with alleged fake licenses are employed by a number of other airlines as well and are a security liability. In total, the licenses of 262 pilots are said to be fake, against which PIA CEO Air Marshal Arshad Malik has summoned his legal and flight operations teams to decide upon appropriate course of action.
According to sources, out of 400 PIA pilots, 150 captains have been found to have obtained fake licenses. A formal announcement regarding an investigation against the CAA’s regulatory department is also expected in Federal Minister Ghulam Sarwar Khan’s press conference.
Earlier in the day, Federal Minister for Aviation, Ghulam Sarwar Khan presented initial investigation report on the Pakistan International Airlines (PIA) plane crash in the National Assembly (NA).
Speaking in the House, the minister blamed plane’s captain, crew members and the Air Traffic Controller (ATC) for the crash, while PIA and the Civil Aviation Authority (CAA) were also declared responsible because of their inaccuracies in preventing such accidents.
CCTV footage showed that the ill-fated plane hit the runway after which, the pilot chose to go around (re-take off). Evidence of damages caused to both engines of the plane due to failed landing was also found, he told.
Ghulam Sarwar said that pilot neglected instruction given by ATC and opened landing gears of the plane at 10 nautical miles while they were turned off at 5 nautical miles. Airport administration had told that the aircraft was flying at high altitude at the time of landing. The controller didn’t give any guidance after the plane hit the runway, he went on to say.
He told that pilot and co-pilot were not focused and discussing coronavirus throughout their flight time. Action against the responsible people will be taken as per the law, he pledged.
The aviation minister said that according to report, the plane was fit for take-off and its landing gears were also working properly. The captain and first officer of the aircraft were well experienced and the weather at that time was also suitable for flying, he stated.
The inquiry report was prepared while keeping in view the investigation record, statements of staff and Airbus team’s report. Data flight recorders, cockpit voice recorders and flight records obtained from air traffic control are also part of the report, he continued.
Meanwhile, Ghulam Sarwar also presented reports on Gilgit crash landing, Air Blue crash and Bhoja Airline incidents, declaring inefficiency of pilots behind these mishaps, however, Chitral plan accident tookplace due to technical fault.
He told the House that action against the pilots holding fake degrees has been launched, adding that 262 pilots out of 860 have not passed their exams by their own while degrees of four were found fake.
Some analysts have raised concerns regarding the incumbent government and the promises it made on the campaign trail regarding reforms in the National Airline. Prime Minister Imran Khan, on multiple occasions, had promised to restore PIA to its former glory by weeding out the corrupt elements inside the airline and taking action against unjust political hirings.
However, questions are now being raised that two years into the government, no such steps were taken and it took a major accident and several lost lives to draw the government‘s attention to the matter.