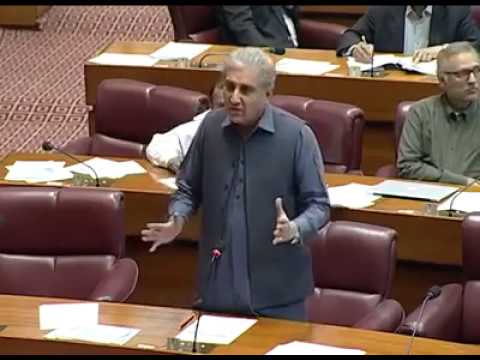 ISLAMABAD: Foreign Minister Shah Mahmood Qureshi on Wednesday regretted that the government had shown haste in placing the names of 172 people — who were named in an investigation report in a case pertaining to fake accounts — on the Exit Control List (ECL).
“We showed haste in placing the names on the ECL,” the foreign minister said. “The government does not want to do anything in a rush now.”
Qureshi was responding to criticism from the PPP over the “government’s failure” to act upon the Supreme Court’s directives to remove the names of the people from the ECL. During today’s National Assembly sitting, the PPP protested over the delay by the government to take the names — which include party Chairman Bilawal Bhutto-Zardari, co-Chairman Asif Ali Zardari and Sindh Chief Minister Murad Ali Shah — off the ECL despite a Supreme Court order in this regard.
Last week, Chief Justice of Pakistan Mian Saqib Nisar had grilled the state prosecutor over why the government had decided to place names of Bilawal and Sindh CM on the no-fly list on the recommendation of the joint investigation team (JIT) tasked with probing the case. The court had ordered the federal cabinet to reconsider its “hasty decision”.
“How long will this government commit contempt of court?” asked PPP leader Shazia Marri in today’s session.
Attempting to placate the opposition party, Qureshi said that the matter was discussed in a federal cabinet meeting and the government had decided to wait until the detailed verdict is released. According to Qureshi, the top court had ordered the government to consider the removal of travel ban, not to take the names off the list immediately.
“The government has not refused to remove the names from the ECL; it has only sought time,” he insisted.
PPP MNA Naveed Qamar pointed out that Chief Justice Nisar — who is heading the bench hearing the suo motu case regarding a delay into a 2015 probe into money laundering via fake bank accounts — was retiring on Jan 17, questioning if the government was waiting for him to leave office.
The foreign minister assured the lawmaker that the government “has great respect for the chief justice and his orders will be implemented even after his retirement”.
PPP leaders accused the government of “using the ECL as a tool for political victimisation”.
“Names of PTI members are removed from the ECL within 24 hours,” Qamar claimed, adding that Liaquat Jatoi, a PTI leader, was also placed on the no-fly list; however, he was travelling with “impunity”.
Qamar and Yousuf Talpur, another PPP MNA, demanded that the attorney general be summoned to the parliament to give his view on the matter.
Qureshi urged the opposition to “show patience” on the matter.
PML-N leader Shahid Khaqan Abbasi also backed PPP, saying that if the PML-N believed the government’s motive behind placing Bilawal’s name on the ECL was to serve democracy, it would have supported the move.
“Bilawal has never been in the government,” the former premier pointed out. “The government should have removed his name from the ECL to show generosity, without waiting for written orders.”