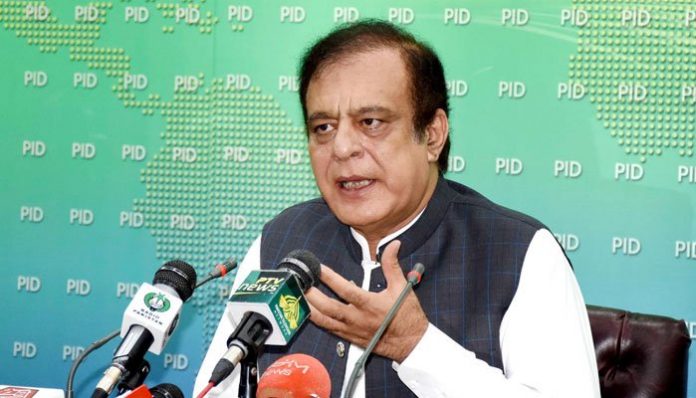 ISLAMABAD: Federal Minister for Information and Broadcasting Shibli Faraz has said that we expected that there would be constructive discussions in the parliament and the government would gain guidance but the opposition repeated what they usually say in press conferences and brought nothing new to the table.
Addressing a news conference in Islamabad today along with Special Assistant on Accountability Shehzad Akbar, he said despite the economic constraint, the government gave a mammoth stimulus package of 1.2 trillion rupees to provide cushion and support to every segment of the society affected by the contagion.
Giving breakdown of the stimulus package, he said this included 480 billion rupees for the business community and exporters and 570 billion rupees for relief to the citizens.
The Information Minister said under Ehsaas program, 104 billion rupees have so far been disbursed amongst the deserving families. He said the cash assistance program is being executed in the most transparent and efficient manner.
The Minister said supplies of essential commodities have been ensured in the lockdown situation. He said there were difference of opinion amongst the provinces on the reopening of the public transport but consensus has been developed on the matter to a great extent now. He said a policy has been framed to responsibly use the transport.
Shibli Faraz said all the federating units have been taken along to cope with the situation arising out of the pandemic.
He said the federal government has provided personal protective equipment to the hospitals in the four provinces.
Stressing the need for unity to tackle the challenge, the Information Minister regretted that the opposition parties did not give any positive suggestions in the National Assembly session convened on their insistence but used the occasion for political point-scoring.
The Information Minister said Prime Minister Imran Khan is committed to eradicating the virus of corruption from the country. He said the country s resources were plundered in the past in an organized manner.
Special Assistant on Accountability Shehzad Akbar said those who were hand in gloves with PML (N) leader Shahbaz Sharif in corruption stand exposed. He said there is a trail of the kickbacks and commission received by the PML (N) leader. He said Shahbaz Sharif will have to respond to the corruption charges. He demanded the trial of Shahbaz Sharif on day to day basis.