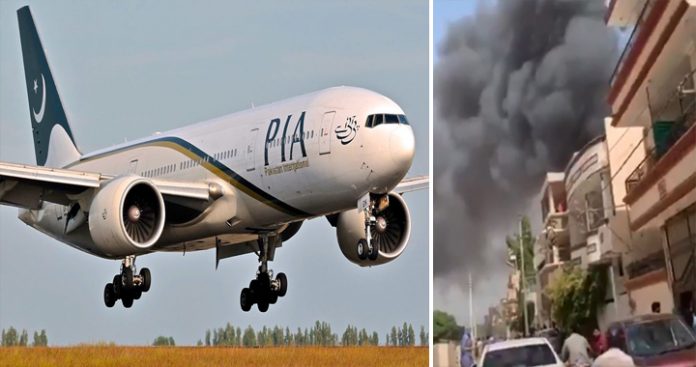 ISLAMABAD: The government has formed a four-member committee to probe into the Pakistan International Airlines (PIA) passenger plane crash near the Jinnah International Airport before landing.
According to a notification released by Cabinet Secretariat Aviation Division, the four-member committee will be headed by Air Commodore Usman Ghani and comprising of Wing Commander Malik Muhammad Imran, Group Captain Tauqeer and Joint Director ATC Nasir Majeed.
The investigation team will immediately present a report to the Ministry of Aviation, while a detailed report will be presented within one month.
Earlier today, at least 66 were killed and dozens others wounded after a Pakistan International Airlines (PIA) plane crashed with nearly 100 people on board in Karachi, according to said Spokesperson for the Sindh Health Department, with dozens more feared dead.
The Pakistan International Airlines (PIA) plane was close to landing when it came down among houses, sparking an explosion and killing several people on the ground.
The national carrier s flight PK-8303 took off from Lahore Allama Iqbal International Airport and crashed in Model Colony area in Malir, approximately 4 kilometers away from the airport.
The plane came to rest about 2:39pm in a narrow alley in the poor and congested residential area known as Model Colony between houses smashed by its wings. Police in protective masks struggled to clear away crowds amid the smoke and dust so ambulances and firetrucks could reach the crash site.
As darkness fell, crews worked under floodlights to recover bodies and a portable morgue was set up. Two passengers miraculously survived, said Meeran Yousaf, Sindh provincial Health Department spokeswoman.
At least two passengers survived the crash, according to Syed Nasir Hussain Shah, the information minister in Sindh province where Karachi is located.
Plumes of smoke were sent into the air as rescue workers and residents searched the debris for survivors and firefighters tried to extinguish the flames. An AFP reporter witnessed charred bodies being loaded into ambulances.
The plane had developed a technical fault, interior minister Ijaz Ahmad Shah said, adding that the pilot issued a mayday call after the craft lost an engine.
PIA spokesman Abdullah Hafeez said there were 91 passengers and seven crew on board the flight, which lost contact with air traffic control just after 2.30pm (0930 GMT).
An aviation authority spokesperson said the number of crew on board was eight.
Residents near the scene said their walls shook before a big explosion erupted as the aircraft slammed into their neighbourhood.
“I was coming from the mosque when I saw the plane tilting on one side. The engines sounds were quite weird. It was so low that the walls of my house were trembling,” said 14-year-old witness Hassan.
Karachi resident Mudassar Ali said he “heard a big bang and woke up to people calling for the fire brigade”.
The disaster comes as Pakistanis across the country are preparing to celebrate the end of Ramadan and the beginning of Eid al-Fitr, with many travelling back to their homes in cities and villages.
Abdul Sattar Khokhar, a spokesman for the country s aviation authority, said the Airbus A320 was travelling from Lahore to Karachi. …Agencies