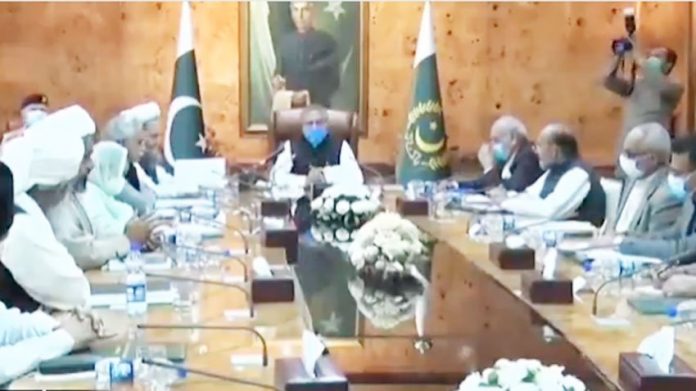 ISLAMABAD: Government, after a consultative meeting of Ulema chaired by President Arif Alvi in Islamabad, has decided to grant conditional permission for congregational prayers and Taraweeh during Ramadan.
According to details, Government and religious scholars of all school of thoughts have agreed on 20 points strategy for congregational prayers in Ramadan amid coronavirus outbreak in the country.
Talking to media after the meeting, President Arif Alvi presented the agreed points and urged people to follow precautionary measures of their safety
Below is a list of all 20 points agreed between the government and Ulema.
-Mosques will not be allowed to install carpets and mats on the floor.
– Offering congregational prayers and Taraweeh on footpaths and roads should be avoided.
– People older than 50 years and children will not be allowed to enter mosques
-Sick people cannot offer prayers in congregation.
– Hygienic principles should be followed during prayers.
– Floor of mosques should be washed with mixture of water and chlorine.
– Distance of six feet should be maintained between people during a prayer.
-Space for two people should be left at the end of a row
– Taraweeh should be offered in veranda if mosque has one.
– Etikaf should be performed in house instead of a mosque.
– People will be allowed to bring their personal prayer mats.
– Collective Iftar and Sehri in mosques will not be allowed.
– Worshippers should perform ablution at their homes.
– People should wear masks and avoid shaking hands.
– Formation of crowds before and after prayers should be avoided.
– A committee of mosque and Imam Bargahs should be formed to coordinate with police.
-Committee should ensure implementation of all SOPs.
– Administration of mosques should mark position of worshippers in a row.
-Government will be allowed to interfere if agreed SOPs are violated.
– Government has the authority to further tighten measures in a sensitive area.
President Arif Alvi said that Ramazan is a month of worship and Muslims love this month a lot. He reminded the nation that special prayers should be made for those in Kashmir during Ramadan.
President Arif Alvi expressed the confidence that the precautionary measures will be taken in mosques during the holy month of Ramadan to prevent the spread of coronavirus.
He stressed that the message of discipline to cope with coronavirus must emanate from mosques. He said we have to follow discipline as per the life and teachings of holy Prophet Muhammad (SAW).