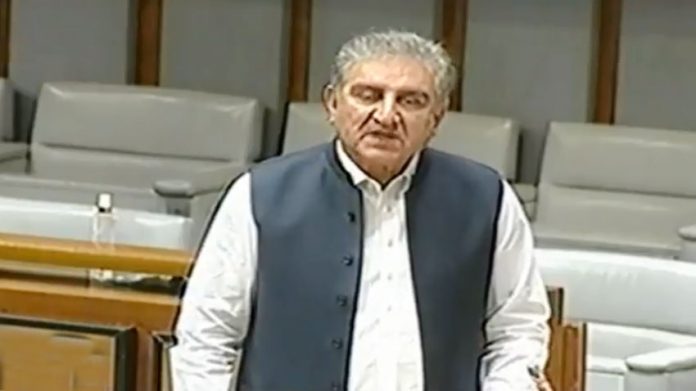 ISLAMABAD: Foreign Minister Shah Mahmood Qureshi on Tuesday stated in clear terms that the Pakistan Tehreek-e-Insaf-led federal government doesn’t want to completely roll back the 18th Amendment.
Speaking in the Senate, he said the government doesn’t aim to do away with the constitutional amendment but its “weak points should be reviewed and addressed.”
“We don’t have a two-thirds majority to bring any change, why are you afraid,” the foreign minister said, pointing to opposition senators.
He took the opposition to task over criticism of the government for a delay in convening a session of the house, saying it was because of lack of consensus in the opposition that the session got delayed.
Qureshi said even PPP’s Saleem Mandviwalla, the deputy chairperson of the senate, doesn’t support the move to call a session of the house, asking the party to first develop consensus in its own ranks.
Speaking about the coronavirus situation, he hoped the country would succeed in its efforts to defeat the pandemic.
“There is no doubt that uncertainty prevails because of the coronavirus. Even stable economies [the world over] are reeling from the pandemic,” the foreign minister pointed out, warning that a recession will follow the global health crisis. He predicted the global economy is going to shrink by 3 per cent.
Defending the government’s decision to ease lockdown restrictions, he said 18 million people would have lost their jobs if the government had extended the lockdown. He said the country’s export witnessed a 40 per cent decline.
Qureshi said the government devised all policies in consultations with all provinces.
He said Prime Minister Imran Khan holds meetings and give directions on a daily basis to cope with the current situation of Covid-19. He asked the opposition parties not to do politics on the pandemic.
The foreign minister said the situation is very serious in India-held Jammu and Kashmir. He said the BJP government has intensified its persecution campaign in the occupied territory as the Indian forces have started barging into houses of Kashmiris and killing the innocent and armless Kashmiri people under the garb of coronavirus.