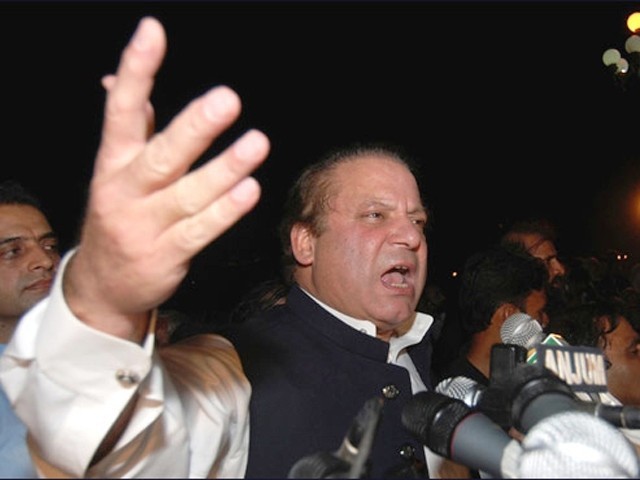 LAHORE: Prime Minister Muhammad Nawaz Sharif has said that PML-N government is implementing the agenda of progress and development of the country and service to people.
He was addressing a public gathering at Kala Shah Kaku after laying the foundation stone of Lahore Eastern bypass at Kala-Shah Kaku on Friday evening.
He said elevating the living standard of the people of the country is the duty of the government and PML-N is fulfilling its responsibility in this regard. He said the world is acknowledging the pace of development in Pakistan.
The Prime Minister said that the network of the development has been spread throughout the country. He said yesterday the government has launched different project in Balochistan that will change the fate of the people of the province. He said all the sectors and all areas of the country are being addressed equally.
He said forty hospitals will be set up throughout the country with a capacity of ten thousand beds on modern lines. He said work is underway on electricity projects all over the country that will help overcome loadshedding by 2018 completely. He said all areas of the country are being linked through motorways and highways networks.
The Prime Minister said that the government will come into power in the next election on the basis of its performance. He said those making predictions against the government will not succeed in their designs. He said PML-N has been winning in the by-elections with considerable majority due to its performance.
The Prime Minister announced different other development projects for the area including overhead bridge at Imamia Colony, construction of Sher Shah Suri Road and Motorway interchange at Pindi Das.
Speaking on the occasion, Minister for Defence Production Rana Tanvir Hussain said that due to the untried efforts of the government today’s Pakistan is much better as compared to that of 2013.
He said the government has resolved the major issues facing the country including terrorism, energy crisis and economy of the county. He said continuity of the policies is imperative for sustainable peace and development in the country. He said the history will remember Prime Minister Muhammad Nawaz Sharif for his development in the country.
He said in 2018 PML-N will give a prosperous, developed and peaceful country to the country. He said those creating hurdles in the path of development will be rejected by the people of the country in the next election like past.
Earlier, Prime Minister Muhammad Nawaz Sharif performed the groundbreaking of Lahore Eastern bypass at Kala-Shah Kaku on Friday evening.
Chairman National Highway Authority briefed the Prime Minister about the salient features of the project.
The 16.5 kilometer long bypass will be completed at a cost 28 billion rupees.Situated in the east of Lahore, this bypass will connect with Lahore Ring Road at a distance of 3.3 kilometer from Niazi interchange.
This bypass will start from Mehmood Booti interchange and end at GT Road and Lahore-Islamabad Motorway junction at Kala-Shah Kaku interchange. It will consist of six lanes, each having 3.65 meter width while the outer shoulder will be three meter and inner shoulder will be one meter wide.
The maximum speed limit on this bypass will be 120 kilometer per hour. The completion of the project will help to improve movement of the traffic in the city and linking areas besides promotion of tourism and trade in the region.
Minister for Defence Production Rana Tanvir Hussain was also present on the occasion.