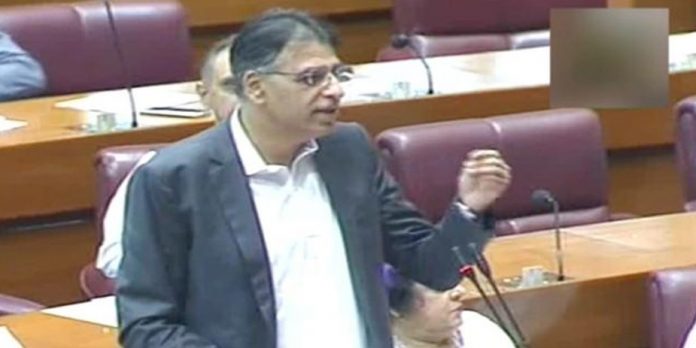 ISLAMABAD: Finance Minister Asad Umar on Wednesday launched staunch defence of the government’s finance amendment bill before it was presented in the National Assembly for approval.
After PML-N leader Ahsan Iqbal delivered his speech, the finance minister took the centre stage to apprise the parliament on the challenges facing the country’s economy.
Umar said that it is unfair that the 40-day old PTI government is being asked to fix matters that were not fixed in the previous 40 years.
He reminded the PML-N lawmakers of the problems that were there in their reign but weren’t dealt with. “The gas sector was fine during PPP’s government but got destroyed during the PML-N era.
“The circular debt for just this past year was Rs403 billion, and overall the circular debt has soared to Rs1.2 trillion. And then they say that streams of milk and honey used to flow in their reign.
The finance minister defended the govt’s policies, claiming that they were geared towards serving the poor, which he said wasn’t the case in previous eras.
“The PML-N never thought of the poor, which is why there was the condition of being a tax filer even for the purchase of a motorcycle,” he said. “We have removed this condition even for the 200cc rickshaws so that the poor can be facilitated.
“The farmers are also close to our heart. We are giving subsidies on urea and LNG-operated plants. For Rabi season, too, we are giving subsidies worth Rs6bn to Rs7bn.”
Umar said that action has begun against those “big personalities” who have still not bothered to become tax filers.
“Such 179 people have been issued notices,” he said. “No one should think that they will escape unscathed. This state is not this weak that it cannot catch you. Those who have massive funds in banks, their details will be obtained.”
The finance minister recalled the PML-N’s promise to end load-shedding in the buildup to the 2013 elections. “You had vowed to end load-shedding, what happened of it,” Umar said. “If Charsadda, Bannu, Swabi, Lyari, Noshki and Khuzdar are not a part of Pakistan, then your claim to having put an end to load-shedding is true.”
“Nepra has negated their claim to provide cheap electricity as well. Their own appointed regulator has recommended that the power tariff be inflated by Rs3.89. All these projects whose rates are being hiked were inaugurated during their governments.”