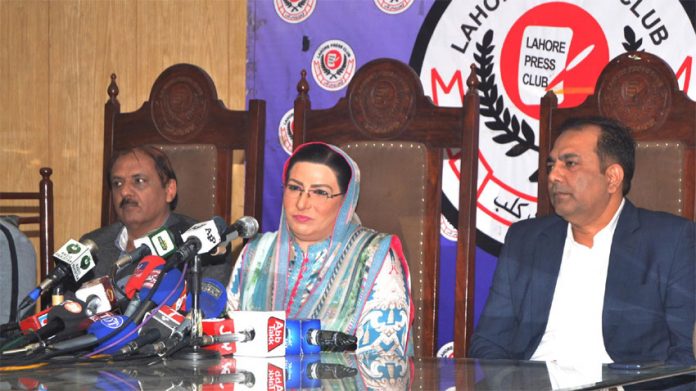 SIALKOT: Special Assistant to the Prime Minister on Information and Broadcasting, Dr Firdous Ashiq Awan says the government would remove all genuine reservations of its allies by adhering to the policy of consensus and reconciliation.
Addressing ‘Meet the Press Programme’ at Lahore Press Club, she said the PTI government is implementing its reform agenda by making effective legislation to abolish the obsolete system in the country.
She said through economic stability, the government is providing maximum relief to masses. A crackdown has also been launched against flour millers, hoarders, profiteers and elements creating artificial price-hike to stabilize the prices of daily use items.
Firdous Ashiq Awan called upon the media to play its role in pointing out those creating artificial price-hike, hoarders and cartels etc. People are being given subsidy on edibles including Ghee, flour, sugar and pulses at utility stores under 6 billion rupees relief package announced by the prime minister.
Meanwhile, in a tweet, Dr Firdous Ashiq Awan expressed her displeasure over wrongly dissemination of pictures and footage of thalassemia awareness drive event by some sections of media.
She said that the event was about media coverage in Lahore for creating awareness in public to donate blood for thalassemia children, however the footage and pictures of the event were wrongly presented in the social media.