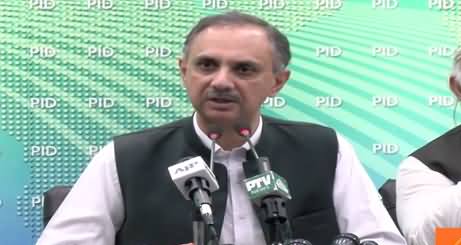 ISLAMABAD: Federal Minister Omar Ayub Khan said today (May 25) that the Pakistan Muslim League-Nawaz (PML-N) provided electricity to even non-bill payers and halted petroluem prices from hiking to win the elections. “Former government laid landmines for us in power, planning and economy sectors which we are gradually removing”, he expressed.
While addressing to a press conference, he expressed, “Credit did not go to Pakistan Muslim League (PML-N) government for ending power load-shedding in the country as the past government left behind unpaid circular debt of Rs450 billion,” Minister for Power showed confidence saying that circular debt will be completely overcome by December next year.
The minister went on to say that a sum of Rs81 billion profits has been generated in the first eight months.
He said currently, there was zero load-shedding on 8790 feeders during Sehar and Iftar and around 80 percent feeders have been completely cleared from power theft. He asserted that 80 percent areas are free from load-shedding now.
He said the PTI led government took pragmatic steps for bringing reform in the energy sector. NEPRA had recommended Rs.3.80 per unit tariff hike but the government increased only Rs.1.27 per unit. No power tariff was raised for consumers using upto 300 units, he added. Similarly, small traders were also exempted from tariff hike, he added.
“Talks for 2000 megawatt projects in Balochistan are undergoing”, he added.
Former Federal Minister Miftah Ismail said that Prime Minister Imran Khan taking credit for eliminating the load shedding is just like as if a rooster thinks a day arises due to its crawing.
Earlier today, Omar Ayub Khan said the Pakistan Tehreek-e-Insaf (PTI) led government would announce a new oil and gas exploration and production policy in next few months.
He said they would also initiate auction of forty new oil and gas blocks from December this year. This would generate good activity in oil and gas sector.
Omar Ayub said the ground breaking of Khalifa Point Refinery project would be performed by end of this year. This eight billion dollar project was a joint venture of PARCO and the United Arab Emirates, Radio Pakistan reported.
He said the refinery would have output capacity of 250,000 barrels per day.