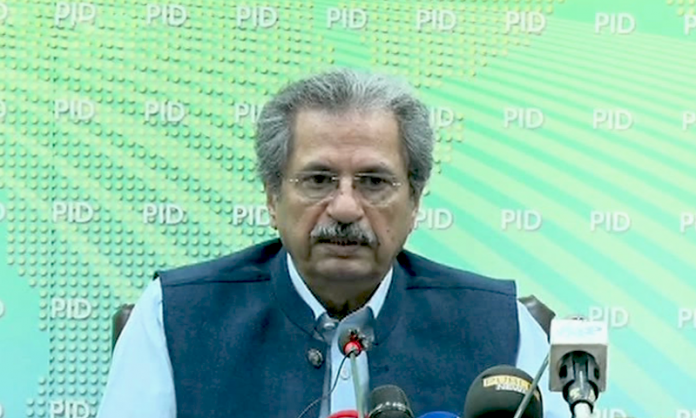 ISLAMABAD: Federal Minister for Education and Professional Training, Shafqat Mehmood has said incumbent government is striving hard for introducing uniform syllabus across the country at earliest.
Expressing his views during a presser in the federal capital, the minister said all possible efforts are being made by the education ministry for introduction of the uniform syllabus countrywide and recommendations to be presented to Prime Minister Imran Khan soon.
Mr Mehmood while underlining the need of enhancing budget for the education sector, said for the progress and prosperity of the country, “every children has to be enrolled in the school.”
Turning the focus to the latest technology, he said government is also utilizing the technology to address the shortage of the teachers in order to provide better literacy facilities to the upcoming generations to make them compete in the modern era.
Stressing the importance of the technical education, Shafqat Mahmood said country’s future lies in providing marketable skills to youth and enable them to earn respectable livelihood.
Exploring the idea further, the minister said students will be equipped with technical education in the schools in their respective fields of interest.
Talking about political differences amongst the parties, the minister said that all stakeholders are on the same page for uplifting standards of the education in the country.
Shafqat Mehmood said the plan to bring the out of school children to education institutions will initially be launched in Islamabad as a pilot project. ” the project to be expanded countrywide, if it achieves the desired goals, he continued.
Shafqat Mahmood on October 30 had said that education and skill development is the top priority of the incumbent government.
He was addressing a meeting at National Vocational and Technical Training Commission (NAVTTC) headquarters. According to a press release issued from the ministry, Mahmood had said they will introduce such systems on the style of successful models of developed countries, which will not only improve the quality of education but also enhance the standards and provision of skills.
“We will soon make vocational education a part of traditional education in the schools so that those children who cannot continue education can be attracted to getting skills” he said.