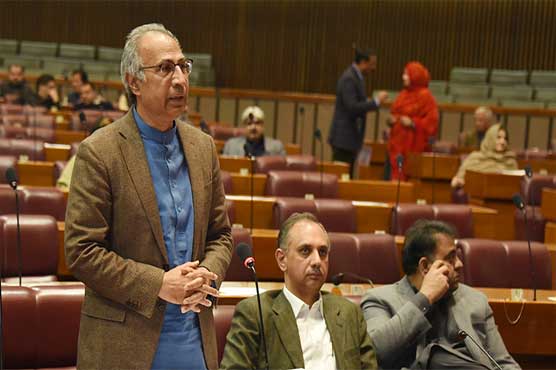 ISLAMABAD: Adviser to Prime Minister on Finance and Revenue Dr Abdul Hafeez Shaikh on Wednesday has told that the incumbent government of Pakistan Tehreek-e-Insaf (PTI) is taking steps for economic stability in the country.
Speaking in National Assembly (NA), the adviser said that the economic conditions are directly affecting the people of Pakistan for which, the government is paying full attention on improving this situation.
Developed countries had expressed their interests for investment in Pakistan that balanced the economy for four years, he added.
Hafeez Shaikh said that no prime minister can influence the value of any currency with orders. The main reason behind the economic crisis is that we took loans in dollars when we were not having sufficient amount of this currency in the country, he added.
The adviser said that zero export growth was recorded during the tenure of previous government. No one was ready to help Pakistan in this critical situation, he went on to say.
He reminded country was at the verge of bankruptcy when the present government assumed power.
Shaikh said that we took loan from International Monetary Fund (IMF) in order to boost the economic growth. “Bilateral assistance from the friendly countries amounting to eight billion dollars and the IMF financing of six billion dollars on easy terms as well reduction in our expenditures helped avert the crisis,” he stated.
Hafeez Sheikh said the government has increased the funding for social safety nets from one hundred billion rupees to 192 billion rupees, which is an unprecedented increase.