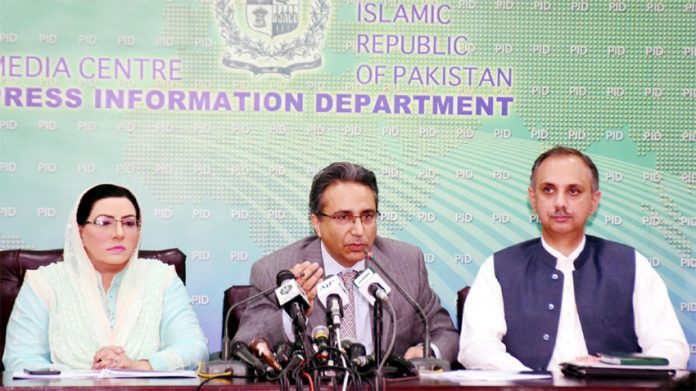 ISLAMABAD: Special Assistant to the Prime Minister on Energy Nadeem Babar says the government has decided to abolish various unnecessary regulations to facilitate investment in petroleum sector in the country.
He was addressing a news conference along with Minster for Power Omar Ayub Khan and Special Assistant on Information and Broadcasting Firdous Ashiq Awan in Islamabad on Thursday afternoon.
Nadeem Babar said various initiatives, including policy reforms, are being introduced to ensure ease of doing business in petroleum sector.
Unveiling key decisions in five areas of petroleum sector, the Special Assistant on Energy said at present, twenty-four to thirty approvals are required in Exploration and Production, and ten of them are being removed.
He said about twenty-five approvals are required for establishing a petrol pump, which too are being cut to seven. He said approvals for storage of petroleum products are also being decreased from nineteen to six.
He said tax exemptions will be offered for installation and up-gradation of refineries.
Giving detail of facilitation being introduced in Pipeline and Gas area, the Special Assistant said gas consumers will have fifteen days bill payment period.
He said a public awareness campaign about usage of domestic gas in the winter will be launched in September. He said a Mobile App and Portal will be launched for registration and redressal of public complaints against gas companies. He said provision of gas connection for industry within thirty days will be ensured. He said three oil and gas discoveries have been made over the last six months while two or three more are in the pipeline.
As regards Liquefied Petroleum Gas, Nadeem Babar said a new policy has been prepared to increase domestic production of LPG and decrease its import. He said a pricing mechanism will also be introduced about LPG.
He said if any company intends to install Liquefied Natural Gas terminal in the country and it does not want to sell it to the government, it will not require any approval from the government.