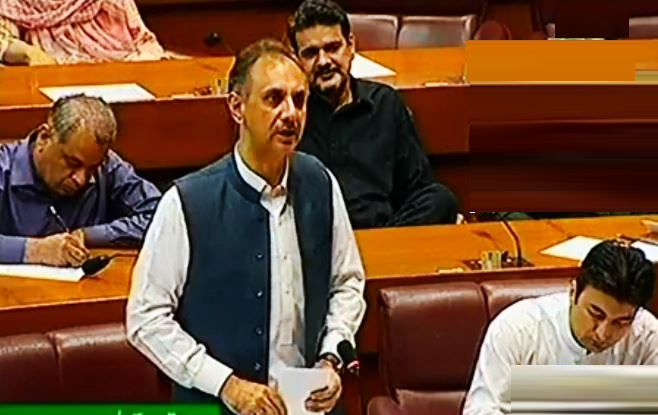 ISLAMABAD: Making an opening speech on the budget from treasury benches, Minister for Power Omer Ayub emphatically stated that the revenue target of 5.5 trillion rupees set for the next fiscal year will be achieved by the PTI led government.
Omar Ayub Khan maintained that Pakistan Muslim League-Nawaz (PML-N) and Pakistan Peoples Party (PPP) left each other behind in taking loans. He said the PPP and the PML-N in their ten year rule indebted the country of twenty four thousand billion rupees. He said we have paid three thousand billion rupees this year only as an interest on the loans taken in the past.
Criticizing the economic performance of PML-N and PPP governments, he said that the exports remained stagnant during their period and nothing was done by them to stabilize the economy.
Omer Ayub said unlike the past, the present government is bringing improvement in the system.
He said it is because of the prayers of the people that an honest leadership is governing and transforming the country.
“Pakistan has to pay a debt of Rs30,000 billion as the previous government took loans worth Rs30,846 billion and Rs24,000 billion were taken in ten years.
“The government will pay debt of Rs3,000 billion this year and will collect revenue of Rs5,500 billion. Ratio of currency printing was increased hundred percent from 2013 to 2018.”