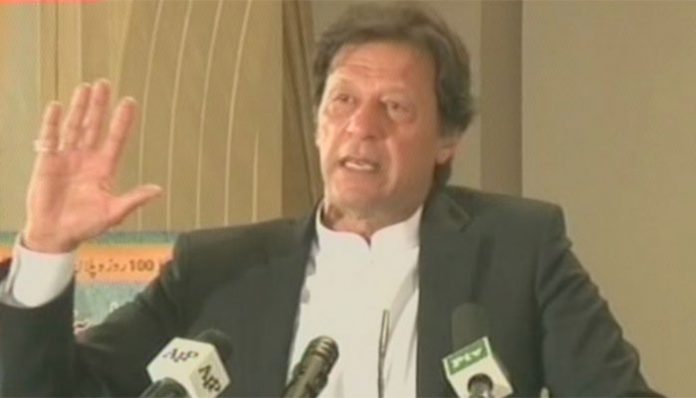 GHOTKI: Prime Minister Imran Khan on Saturday warned Pakistan Peoples Party (PPP) President Asif Ali Zardari and Pakistan Muslim League-Nawaz quaid Nawaz Sharif that they can join hands or do as they please but the government “will only let them go if they return the nation’s money”.
Addressing a rally at the palace of Grand Democratic Alliance’s (GDA) Ali Gohar Khan Mahar in Khangarh, the premier said, “Malaysian Prime Minister Mahathir Mohamad visited Pakistan on my invitation. The Malaysian premier strengthened institutions and brought happiness in the lives of his people.”
“Nations aren’t poor but corruption makes them poor and indebted,” he continued. “Pakistan was progressing in Asia and today each and every child in the country owes debt. We also need to take loans to pay back loans,” the premier lamented.
“After the 18th Amendment, the federation became bankrupt. After expenditures, the federation goes in a debt of Rs700 billion,” he continued.
Stating that in the past the nation was plunged in debt, PM Imran said, “Sindh should have been Pakistan’s happiest province. Karachi is Pakistan’s economic hub and the most gas is found in Sindh.”
“Land in Sindh is fertile but people in interior Sindh are the most poor and the only reason for that is corruption,” he stated. Upholding that Rs237 billion were given to Sindh in ten years as gas royalty, the premier asked, “How much did Ghotki get? 70% of Sindh’s gas comes from Ghotki.”
Taking a hit at the PPP, PM Imran said, “A train march was launched to hide corruption worth millions of rupees. Money from corruption goes into fake bank accounts that is then laundered out of the country.”
Alleging that people were asked to join the train march in return for Rs2,000, PM Imran claimed, “The poor were given Rs200 instead and cheated.”
Upholding that “today a drama is being staged that democracy is in danger because accountability is being done”, the premier said, “I challenge you [Asif Ali Zardari and Nawaz Sharif] today, do whatever you want, join hands if you want, we still won’t leave you. We will only leave you if you return the nation’s money.”
PM Imran further shared, “Before entering politics I used to come to Sindh for hunting and now that I am in politics, my hunt has changed.”
The premier said, “The project to eliminate poverty is the best project.”
Earlier, Foreign Minister Shah Mehmood Qureshi, who was accompanying the premier addressed the rally and said, “PPP will not be seen in Karachi now.”
“Today, Zulfiqar Mirza and Safdar Abbasi are sitting among us. Ghotki joins Punjab and Sindh,” he said.
The foreign minister said that he had announced his decision to join the Pakistan Tehreek-e-Insaf (PTI) during a rally in Ghotki. “I decided to join the PTI and bring change,” he said and added that the paryty “has the thinking of a federation and will become its symbol.”
Taking a hit at the Pakistan Peoples Party (PPP), Qureshi said, “You won’t see PPP in Karachi now, it has shrunk and is limited to interior Sindh and the people of the province know the reason why.”
Further criticising the PPP, Qureshi questioned, “They have been in power in Sindh for the last 10 years. Has the situation in the province improved or become worse?”
“The people of Sindh should decide whether they want to embark on a new path,” he added. “The winds of change started from Khyber Pakhtunkhwa and entered Punjab. Those who were the symbol of the federation no longer exist in KP, Punjab, Balochistan or Karachi,” the foreign minister said.
“In Punjab, people saw the Pakistan Muslim League-Nawaz be uprooted,” Qureshi said and asked whether the ANP or JUI-F can be seen in KP. “If the people of KP can bring change, then why not the people of Sindh?” he asked.