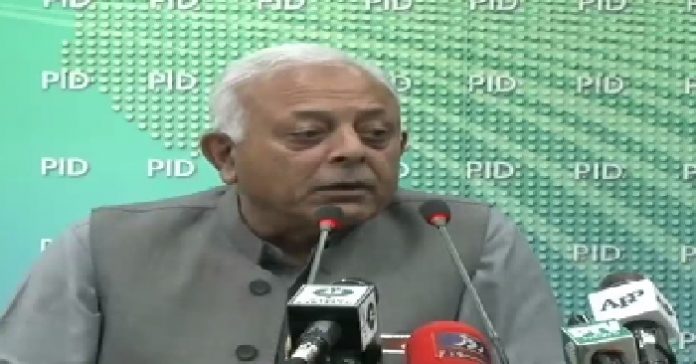 ISLAMABAD: Federal Minister for Aviation Ghulam Sarwar Khan has said that no one will be unfairly saved or implicated in the reports of plane crash investigations, which will be laid before parliament and the public on June 22.
Briefing the media in Islamabad, Ghulam Sarwar Khan said that the PIA flight from Lahore to Karachi crashed during landing. A total of 99 people were on board out of which two people miraculously survived. Twelve to fifteen houses were badly affected in the incident and cars parked on the street were also burnt, he added.
Talking about the identification of the bodies, Ghulam Sarwar Khan said that this is a very painful stage, we are trying to complete the DNA tests as soon as possible. So far, 51 bodies have been identified and handed over to their families.
The aviation minister said why and how this incident happened? And who is responsible? The whole nation is eager to know the cause of the incident and an 11-member Airbus team is investigating the crash.
He said that the Investigation board has taken possession of everything found at the crash siteeverything will be revealed after decoding the equipment in France. The Board of Investigation has to investigate everything. If there was a technical fault in the plane, it is also on record.
While answering a question, he said that if plane landed once then who gave orders to take off again? Everything will be investigated and none of us are experts so we should wait for the report of the investigation board.
Responding to the criticism of political opponents, he said that an accident had also taken place in 2010, what action was taken by the then government and those who criticize us today? We will make the report public unlike previous governments, he added.
He said that Prime Minister Imran Khan also expressed displeasure over the delay in reports and asked why the reports were never released on time? We will public reports of all 12 incidents.
He said that PIA pilot was our respected brother and I assure his family that the inquiry will be conducted in a transparent manner. Any interference in the report is out of the question, he added.
Answering a very important question, he said that there are SOPS of crash landing, if the landing gear does not open, the pilot requests crash landing, however, the pilot did not mention that the landing gear is not opening neither did he request an emergency landing. What was the problem with the landing gear and the engine? He reiterated that we should leave the matter to the investigation board as these are technical questions.