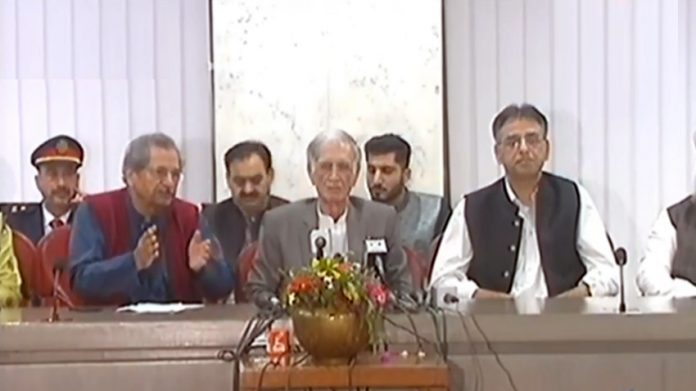 ISLAMABAD: Defence Minister Pervaiz Khattak, head of government’s negotiation committee, on Saturday announced to move court over the statements made by opposition leaders in Azadi March sit in to arrest Prime Minister Imran Khan.
While addressing media in Islamabad alongside senior leaders Asad Umar, Shafqat Mehmood and Firdous Ashiq Awan after PTI core committee meeting, he said PM’s resignation is out of question and national institutes have to come forward when instability prevails in the country. He said opposition would not succeed in its propaganda.
He said the government and PTI Core Committee were “saddened” by the speeches given by opposition leaders on Friday. Khattak said they hoped the JUI-F-led protesters will stick to the agreement they had reached with the government and will not violate its provisions.
“There will be no talk of the prime minister resigning,” he said. “No one should even consider it.”
Defense Minister said core committee also regretted on statements made on container of opposition march.
The defence minister said that his team was in contact with the Rahbar Committee. Reacting to yesterday s statements by the JUI-F chief and other opposition leaders, Khattak said that he was disappointed at the speeches.
Khattak lashed out at the opposition parties, stating that they weren t sticking to their claims.
“They re using threatening language. When these opposition parties do that, it means that they won t back up their claims,” he said.
He said the core committee has decided to go to court against Maulana Fazal ur Rehman on Monday after he made a statement of arrest of the Prime Minister, as it is equivalent to inciting people on mutiny.
Khattak hoped that the protesters would not breach the agreement between the Rahbar Committee and the Islamabad administration.
“If they violate the agreement, then the administration will take action,” he said. “Make no mistake about it–if anything unfortunate happens, these people will be held responsible,” he said.
He said any damage caused to lives and property will be the sole responsibility of opposition if they resort to violence.
The head of government s negotiation team said holding protest at this critical juncture when Kashmir issue is in limelight will undermine this important cause.
Khattak further said these people fear if PTI government completed its term, their politics would end. He said opposition leaders criticized institutions more than government and received the response from institutions, adding that these institutions have made huge sacrifices for the peace in the country.
Replying to a question, Education Minister Shafqat Mahmood said Prime Minister Imran Khan very effectively highlighted the case in the world. The protest march has diverted the attention from the Kashmir issue.
He told a questioner that opposition should lodge their complaint to Election Commission of Pakistan if they have any objection on national election results.