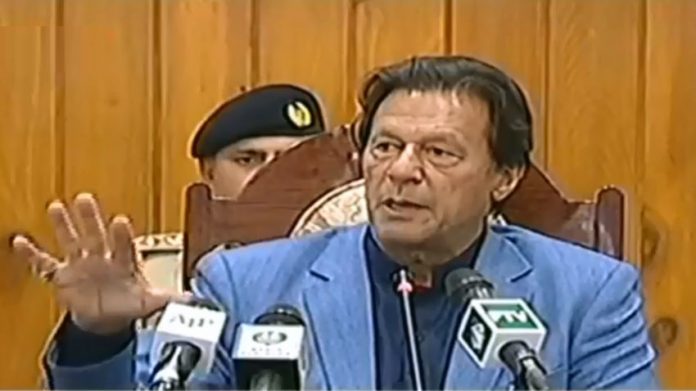 ISLAMABAD: Prime Minister Imran Khan said that religious figures and Ulema agreed on the government’s twenty precautionary points for the opening of mosques. He said if precautionary measures are not taken by people in mosques and there are reports of the spread of the virus, the decision can be reviewed by the government.
Expressing his views on the coronavirus pandemic and other important issues in Islamabad on Tuesday, he said the whole world is facing the negative impacts of the pandemic. He said the countries facing higher number of mortalities due to the virus are now also debating the economic impact of lockdown. He said everywhere now there are discussions of relaxing the lockdown to restart economic activity.
Imran Khan said 192 persons have lost their lives in Pakistan so far. In USA, Britain, Italy and Spain, thousands of people have died by this killer bug.
He said lockdown cannot remain in force in any country for indefinite period as no one knows when the pandemic will end.
Imran Khan said Pakistan is facing the dual challenge of overcoming Corona pandemic and saving the people from hunger. He said our government decided to relax lockdown gradually by opening the cement sector first and then construction industry. He said the industries that are being opened will have to follow SOPs given by the government.
Imran Khan said undue criticism is being made by certain quarters against Tiger Force. He said Corona Tiger Force comprises volunteers and is working without any remuneration or political affiliation. They will disseminate information as well as deliver ration to people at their doorstep.
He said whole country is fighting against coronavirus as one. He said we are a free country and cannot stop people by police who want to go to mosques for prayers.
He said a meeting was held with religious figures and Ulema agreed on all twenty precautionary points for opening of mosques. He said if precautionary measures are not taken by people in mosques and there are reports of spread of virus, the decision can be reviewed by the government. The Prime Minister urged people to do their maximum prayers preferably at home.
Planning Minister Asad Umar said a consensus has been developed between all provinces for testing, tracing and isolation and pilot tests will be held in one or two districts of each province. He said smart lockdown will be implemented in high risk areas.
Focal person on Corona Dr. Faisal said Pakistan is relatively in better position than many developed countries of the world.
However, we need to keep this by following the precautionary measures strictly.
Special Assistant on Poverty Alleviation and Social Protection Dr. Sania Nishtar said more than 60 billion rupees have been disbursed among needy and deserving people under Ehsaas Emergency Cash program. She expressed optimism that program will be able to reach 10 million families. She said Prime Minister inaugurated Ehsaas Ration Portal today