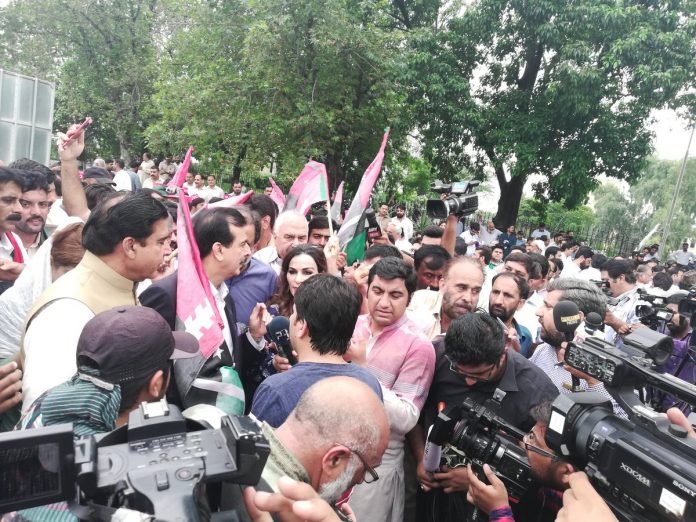 ISLAMABAD: The Grand Opposition Alliance of 11-political parties are holding their first protest demonstration against alleged rigging in the July 25 general elections outside the Election Commission of Pakistan (ECP) in Islamabad.
The decision to hold the protest was made by the newly formed 11-party grand opposition alliance, named ‘Pakistan Alliance for Free and Fair Elections’, at a multi-party conference held in Islamabad on Friday.
Besides the Pakistan Peoples Party (PPP) and the Pakistan Muslim League-Nawaz (PML-N), the opposition alliance comprises Awami National Party (ANP), Qaumi Watan Party (QWP), Pakhtunkhwa Milli Awami Party (PkMAP), National Party (NP) and Muttahida Majlis-i-Amal (MMA).
PPP’s Sherry Rehman, Khursheed Shah and Farhatullah Babar, former prime minister Yousuf Raza Gilani, and PML-N’s Ahsan Iqbal are among the leaders who have arrived at the protest. However, PML-N Chief Shahbaz Sharif and Maulana Fazl, chief of his own faction of the Jamiat Ulema-i-Islam and president of the MMA, have yet to arrive.