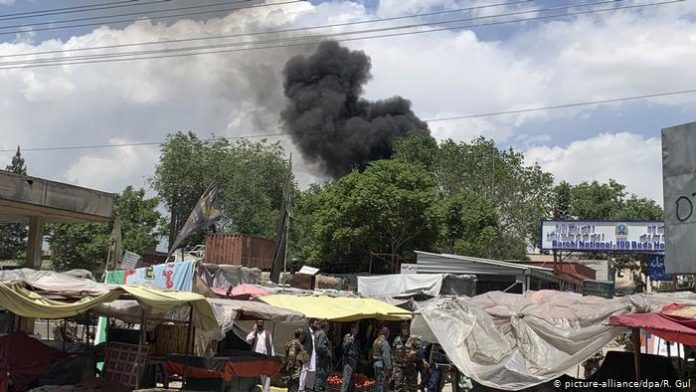 KABUL: Gunmen attacked a hospital in the Afghan capital, Kabul, on Tuesday where the international humanitarian organisation Doctors Without Borders runs a maternity clinic, killing at least eight people, officials said.
Several people were wounded in the attack on Dasht-e-Barchi Hospital, according to a ministry of interior official, and dozens of people were being evacuated.
Some people remained trapped in the hospital and several doctors had leapt to an adjacent building after at least three attackers wearing police uniforms entered, throwing grenades and shooting, government officials said.
There was no immediate claim of responsibility but the Taliban said they were not involved.
The 100-bed government-run facility is supported by Doctors Without Borders, which is also known by its French name Médecins Sans Frontières (MSF), said Wahidullah Mayar, a spokesman for the Ministry of Public Health.
Security forces were working to counter the attack and 80 people including women and children had been evacuated, said interior ministry spokesman Tariq Arian.
The security forces had shot one attacker but clashes were going on, he said.
Deputy health minister Waheed Majroh said eight people including children had been wounded and taken to other hospitals.
MSF did not immediately respond to a request for comment. It says on its website it operates a maternity clinic at the hospital in one of Kabul’s poorest neighbourhoods.
The neighbourhood is home to many members of Afghanistan’s Hazara community, a mostly Shia Muslim minority that has been attacked by the Islamic State group in the past, including at a Kabul ceremony commemorating the death of one of its leaders in March.
Also on Tuesday, 40 people were killed or wounded in an attack at the funeral of a police commander in the eastern province of Nangarhar, according to Attaullah Khogyani, a spokesman for the provincial government.
Several bloody attacks in the capital in recent months have been claimed by Islamic State.
On Monday, security forces said they had arrested three senior Islamic State members including a regional leader.
Last week, security forces killed and arrested several members of an Islamic State cell that authorities said was responsible for several attacks in Kabul including one on a Sikh temple in March.
Roadside blasts in the capital on Monday, which wounded four civilians, were claimed by the group.
Afghanistan is also facing violence around the country from the Taliban even as the United States tries to usher in peace talks after signing a troop withdrawal agreement in February with the militants.
The Taliban say they are holding back from attacking urban centres and their operations are aimed at government security forces.