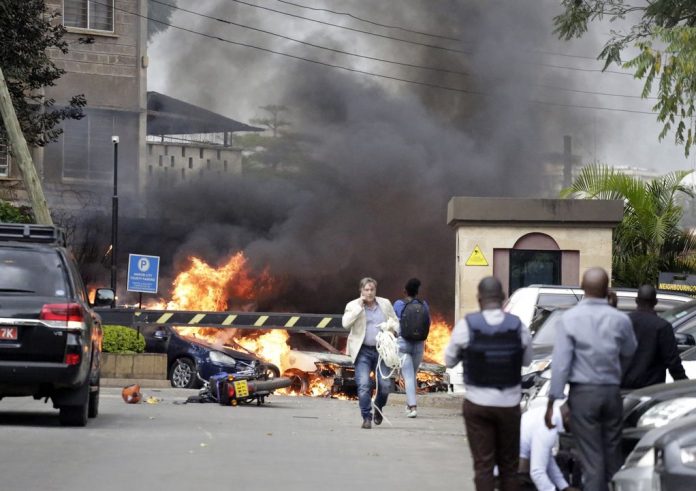 NAIROBI: Gunmen blasted their way into a hotel and office complex in the Kenyan capital on Tuesday, killing at least 15 people and sending workers diving under desks to escape an attack claimed by Somalia-based group al Shabaab.
Nearly 11 hours after the assault began at Nairobi’s upscale 14 Riverside Drive complex, bursts of gunfire and an explosion were heard in the area, suggesting the situation was not yet under control despite government assurances.
Scores of people were still hiding inside the complex, a security source said, and a first responder in touch with many of them said some needed first aid for gunshot wounds. By 1 am local time (2200 GMT), 15 bodies had arrived at Chiromo Mortuary and more were expected, an attendant told Reuters.
Identification papers indicated that 11 were Kenyan, one was American and one was British, he said. The other two were not carrying documents.
A US State Department official confirmed one of the victims was American.
“We can confirm that a US citizen was killed in the attack,” the official said without giving further details.
Kenya’s Interior Minister Fred Matiang’i had said at 11 pm that all buildings at the scene had been secured and scores of people evacuated. But he did not comment on the attackers’ whereabouts and said security forces were still “mopping up”.
Nairobi is a major hub for expatriates and the compound targeted contained offices of various international companies, in an echo of a deadly 2013 assault on a Nairobi shopping centre in the same neighbourhood.
“The main door of the hotel was blown open and there was a human arm in the street severed from the shoulder,” said Serge Medic, the Swiss owner of a security company who ran to the scene to help when he heard of the attack from his taxi driver.
Medic, who was armed, entered the building with a policeman and two soldiers, he said, but they came under fire and retreated. An unexploded grenade lay in the lobby, he said.
“One man said he saw two armed men with scarves on their head and bandoliers of bullets,” Medic told Reuters, as gunfire echoed in the background.
Kenya has often been targeted by al Shabaab, who killed 67 people at the Westgate shopping centre in 2013 and nearly 150 students at Garissa University in 2015. Al Shabaab says its attacks are revenge for Kenyan troops stationed inside Somalia, which has been riven by civil war since 1991.
Earlier in the day, office workers had streamed from the complex, some jumping from windows. Security forces continued to escort small groups to safety into the evening, with some hustled into armoured vehicles amid sporadic gunfire.
Foreign security advisers at the site scrambled to make sure their clients were safe.
Kenyan police chief Joseph Boinnet said the attack began around 3 pm with an explosion targeting cars outside a bank followed by a detonation from a suicide bomber in the hotel lobby. As he spoke, a Reuters reporter on the scene reported heavy gunfire, then an explosion shortly afterwards. …Agencies