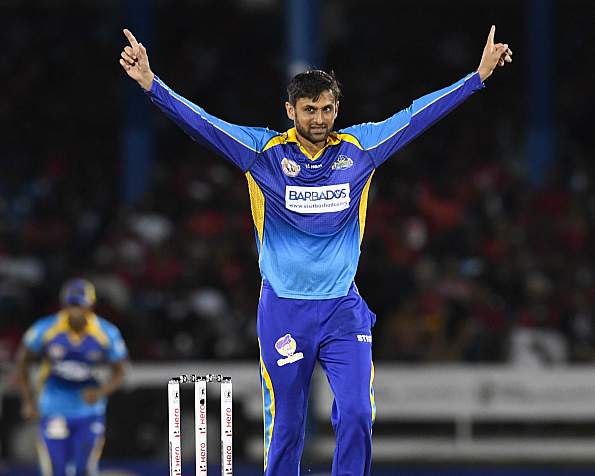 ISLAMABAD: Pakistan veteran all-rounder Shoaib Malik will feature for a different outfit in this year’s Caribbean Premier League as he has been picked up by Guyana Amazon Warriors, a CPL media release stated on Wednesday (May 9). For the past five years, Malik had been a constant feature for Barbados Tridents.
The 36-year-old is excited by the prospect of turning up for a fresh side, which he believes is a very strong unit. “I’ve seen the squad and it’s well balanced, not just us, in other teams as well. Obviously, there are so many good cricketers and as a franchise you have the options even if you prefer some players but still, even if you don’t get that player you still have the option in other players,” Malik mentioned.
“Obviously you want to see that you end up winning, and that’s what I want. I want to do well for my team, not just against Barbados, against the rest of the teams as well.”
The conditions in Guyana are considered to be very close to that of the sub-continent and Malik will be expected to make the most of that familiarity.
Malik said, “Guyana is more like you’re playing in the sub-continent I think. But on that particular day performance is the key of any cricketer and that’s what I’m looking for. Obviously, if you’re playing for a new team the expectations are a lot from you. When they have seen someone that did well for a longer run the expectations are obviously high.”
The all-rounder has his sights set on the 2019 World Cup in England, but he didn’t discount the fact that he is gunning to be a part of the 2020 World T20 as well. “The 2019 World Cup, 50 over cricket, is my last World Cup, but I want to play in the World T20 in 2020, that is my goal for Twenty20 cricket. These are the two big goals which I’m looking at – let’s see how it goes. If I’m consistently performing then I want to play these two World Cups.”
Malik, who has been a part of 306 T20s, having plied his trade across different leagues around the world, mentioned how Barbados had become a part of him in the last few years. “No matter in what island you’re playing in, if you look at the people from the Caribbean, they’re loving people and they’re very entertaining. It’s so much fun being in and playing in the Caribbean, not just in the CPL or if you’re playing any international series there. I’ve been playing there for the last 5 years for Barbados Tridents. I had so much fun in Barbados,” he reminisced.
“Barbados is like even if I step out from the hotel, everyone recognises you. Mostly the hotels are on the beach and when you step out of the hotel or even to go on the beach, everyone recognises you. The hospitality is something which I’m going to miss. Being alone in Barbados, still you don’t feel as if you’re alone in Barbados. You have people around you and I think the whole 5 years is something which I’m going to miss, but I’m sure we’ll have a game in Barbados and that will cover some of my missing parts,” he added. – Agencies