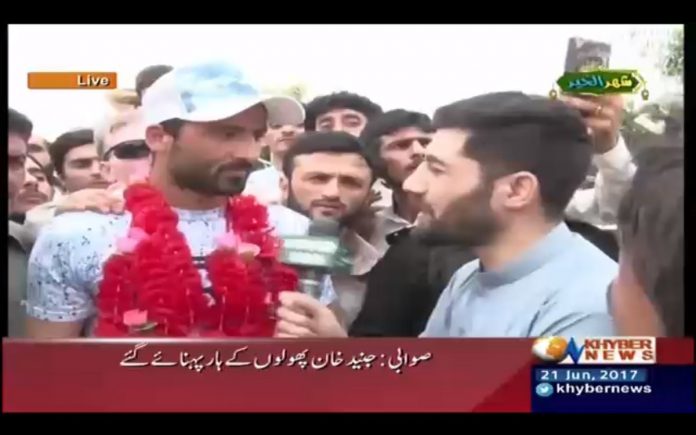 ISLAMABAD: All-rounder Mohammad Hafeez and fast bowler Junaid Khan have Wednesday returned to Pakistan after triumphing in the Champions Trophy.
Pakistan thrashed India in the final by 180 runs to claim their maiden ICC Champions Trophy on Sunday, and the players starting reaching Pakistan from Tuesday in their respective cities to rousing welcome.
Mohammad Hafeez reached Lahore where he was accorded warm welcome by his family, friends and the cricket fans. Flower petals were showered on him, and slogans of ‘Pakistan Zindabad’ and ‘Professor Zindabad’ were chanted.
Speaking to the media, Mohammad Hafeez said Sarfraz Ahmed led the team brilliantly, and there was no pressure on the team in the final match against India.
Junaid Khan, who claimed eight wickets in the tournament, reached Islamabad and was greeted by cricket enthusiasts and his fans. Junaid said he is very happy to see such a warm welcome by the people.
However, no government or PCB official was present at the airport to welcome the left-arm pacer.