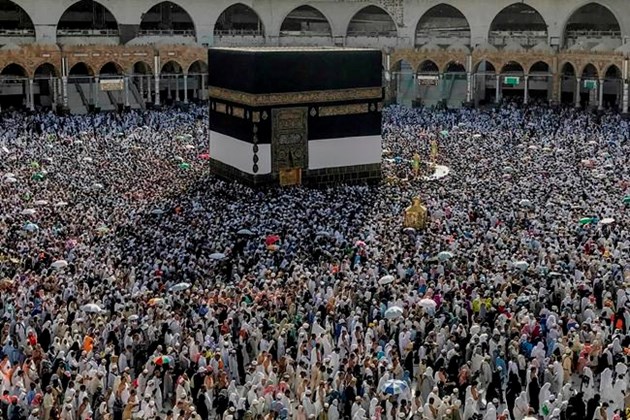 RIYADH: Saudi Arabia will allow around 1,000 pilgrims residing in the kingdom to perform the Hajj this year, a minister said Tuesday, after it was announced the ritual would be scaled back due to coronavirus.
“The number of pilgrims will be around 1,000, maybe less, maybe a little more,” Hajj Minister Mohammad Benten told reporters.
“The number won’t be in tens or hundreds of thousands” this year, he added.
The pilgrimage, scheduled for the end of July, will be limited to those below 65 years of age and with no chronic illnesses, Health Minister Tawfiq al-Rabiah said.
The pilgrims will be tested for coronavirus before arriving in the holy city of Makkah and will be required to quarantine at home after the ritual, Rabiah added.
Saudi Arabia, whose virus cases have surpassed 161,000, announced on Monday it would hold a “very limited” Hajj this year, as it moves to curb the biggest coronavirus outbreak in the Gulf.
The decision marks the first time in Saudi Arabia’s modern history that Muslims outside the kingdom have been barred from performing the Hajj, which last year drew 2.5 million pilgrims.
Benten did not specify how the pilgrims will be selected.
But he said the government will work with various diplomatic missions in the kingdom to select foreign pilgrims residing in Saudi Arabia who fit the health criteria.
The Hajj — a must for able-bodied Muslims at least once in their lifetime — typically packs millions of pilgrims into congested religious sites and could be a major source of contagion.
The decision comes as Saudi Arabia grapples with a major spike in infections, which have now risen to more than 161,000 cases — the highest in the Gulf — with more than 1,300 deaths.
But the move to scale back the five-day event is fraught with political and economic peril and comes after several Muslim countries pulled out.
Muslims expressed disappointment at Saudi Arabia’s decision to scale back this year’s Hajj pilgrimage, but many accepted it was necessary as the kingdom battles the coronavirus outbreak.
The move had looked inevitable for some time, but the announcement nevertheless added to disappointment for Muslims who invest huge sums and face long waits to go on Hajj.
“My hopes of going to [Makkah] were so high,” said Kamariah Yahya, 68, from Indonesia, which had already barred its citizens from the Hajj earlier this month.
“I’ve been preparing for years. But what can I do? This is Allah’s will — it’s destiny.”
Shahid Rafique, chairman of a Pakistani Hajj tour operators’ group, said it was “a moment of sorrow for all the Muslims, especially for those who were making plans for years and years”.
“Professionally, it is a big loss for us, for all the private Hajj organisers and we may not be able to recover from this loss for many years,” he said.
In Bangladesh, head of a Hajj travel agencies’ group, Shahadat Hossain Taslim, said that “many people will be shattered” by the decision but accepted it was for the best.
“Unlike other countries, the majority of Bangladeshi pilgrims are elderly people, and they are vulnerable to COVID-19,” he said.
The minister for minority affairs in India said more than 200,000 people from the country had applied to go on the five-day event, scheduled for the end of July, and they would receive a full refund of any money deposited for the pilgrimage.
The decision has prompted renewed questions about Saudi Arabia’s custodianship of Islam’s holiest sites — the kingdom’s most powerful source of political legitimacy.
A series of deadly disasters over the years, including a 2015 stampede that killed up to 2,300 worshippers, has led to criticism of the kingdom’s management of the Hajj.
Mohamad Azmi Abdul Hamid, from charity the Malaysian Consultative Council of Islamic Organisations, said Muslim nations should have been allowed to take a “collective decision”, rather then it being left to Riyadh.
“It’s high time (the holy cities of Makkah and Madina) are managed by an international board represented by Muslim countries,” he told AFP.
Despite the disappointment, some Muslims were already looking ahead to 2021 and hoping they would be able to perform the pilgrimage then.
“I’m still hoping to go on Hajj next year, and pray that I’ll stay healthy until then,” said Yahya in Indonesia. …Agencies