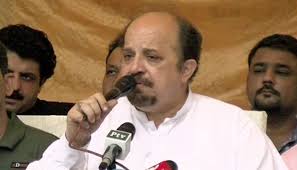 KARACHI: Opposition Leader in Sindh Assembly Firdous Shamim Naqvi on Friday has advised the nation to stay calm and wait for economical progress in the country.
Responding to the reaction of the masses against government’s new Hajj policy, the Pakistan Tehreek-e-Insaf (PTI) leader said that the religious obligation should not be performed on subsidy or loan. The country is in crisis therefore, we are taking austerity measures, he told.
Naqvi said that it will take time to handle the current situation. He further lashed out at Pakistan Peoples Party (PPP) Co-chairman Asif Ali Zardari.
It is to be mentioned here that as per new policy, the Hajj expenses for southern areas will be Rs4,26,000 which was Rs2,70,000 last year.
Besides this Rs1,56,000 raise has been made in the Hajj expenses of northern areas taking it to a total of Rs4,36,000 from Rs2,80,000.
Finance Ministry adopted stance that the economical situation does not allow to provide the subsidy while Religious Affairs Ministry maintained that Council of Islamic Ideology (CII) has already ruled in favor of subsidy.
Finance Ministry told that Rs8.15 billion will have to be given as subsidy in government Hajj Scheme and if provided under private scheme, the financial burden will rise till Rs14 billion.