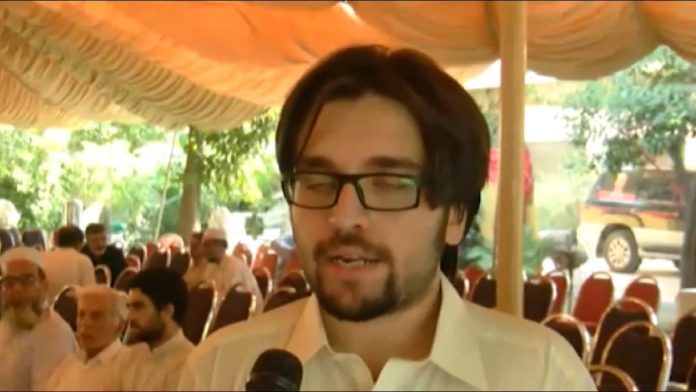 PESHAWAR: Son of the assassinated Awami National Party (ANP) leader Haroon Bilour – Daniyal Bilour has received a phone call threatening to attack him.
Police said Irfanullah, personal assistant to Samar Bilour, widow of Haroon Bilour, registered a case in Sharqi Police Station in Peshawar on Friday in which he stated that he was present at Bilour House situated near the Public Service Commission office in Peshawar Cantt when he received a phone call. The caller identified himself as Shahzad Gul. He claimed that he has taken lives of Bashir Bilour and Haroon Bilour and now is the turn of Daniyal Bilour, who is the last political hope of Bilour family.
Irfanullah further told police that the caller said ‘they’ also tried earlier to convey ‘demands’ to Bilour family, but no ‘positive reply’ was received. He claimed that it was the reason that Haroon Bilour was eliminated and now his message must be conveyed to Samar Bilour and Haji Ghulam Ahmed Bilour as they have already seen many tragedies. The caller said Daniyal Bilour will also face the same fate if his demands were not accepted.
Irfanullah said the same message was received on WhatsApp in the evening in which the sender identified himself as Farooq and said the sender’s number must be used if the Bilour family wants to respond to ‘demands’. Sharqi Police Station filed the report under terrorism clauses and initiated investigation.
On the night of July 10, 2018, Daniyal Bilour’s father Barrister Haroon Bilour was martyred along with 14 other party workers in a suicide blast during a corner meeting of the ANP in Yakkatoot area of Peshawar. Over 70 party activists were also injured in the blast.
On December 22, 2012, Bashir Bilour, father of Haroon Bilour and grandfather of Daniyal Bilour, was martyred in a suicide attack when he was going back home after attending a party meeting. Bashir Bilour’s secretary Noor Muhammad was also martyred in the suicide attack.