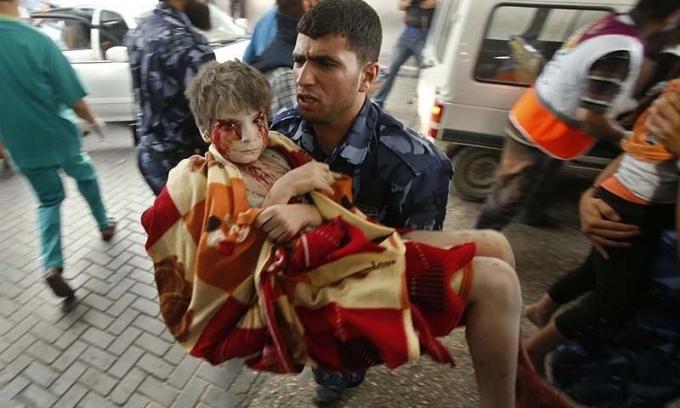 UNITED NATIONS: Human Rights Watch on Thursday urged United Nations Secretary-General Ban Ki-moon to add Israel to annual “List of Shame” of children’s rights violators, after more than 500 children were killed in the war in Gaza last year.
The US-based rights group called on Ban to resist pressure from Israel and the United States to keep the Israeli Defense Forces off the list due to be released next week.
“Secretary-General Ban can strengthen child protection in war by compiling his list based on facts, not political pressure,” said Philippe Bolopion, crisis advocacy director at Human Rights Watch.
Human Rights Watch is also calling for the Palestinian movement Hamas to be included as well as armed groups in Pakistan, Thailand and India for serious violations including attacks on schools and the recruitment of child soldiers.
The current list has 51 groups including Boko Haram and Islamic State as well as the armed forces from eight countries such as Syria, Yemen, the Democratic Republic of Congo and South Sudan.
The 50-day conflict in Gaza last year killed 539 children, injured 2,956, and most Palestinians are now struggling with trauma and life-long disabilities, according to the UN children’s agency, UNICEF.
Obama lashes out at Netanyahu
US President Barack Obama has warned Israel that its refusal to renew peace talks with the Palestinian Authority will “make it hard” for the US to veto anti-Israel motions in the United Nations.
In an interview to an Israeli television channel earlier this week, Obama also criticised Israeli Prime Minister Benjamin Netanyahu for saying that a Palestinian state won’t be founded on his watch.
He referred to his remarks after the recent Israeli elections when he said the US would have to reassess its policy towards Israel, and said he was referring to something specific.
“If there are additional resolutions introduced in the United Nations,” the United States would find it difficult to defend Israel, he warned.
“If, in fact, there’s no prospect of an actual peace process, if nobody believes there’s a peace process, then it becomes more difficult to argue with those who are concerned about settlement construction, those who are concerned about the current situation — it’s more difficult for me to say to them, be patient and wait because we have a process here,” he said.
Mr Obama said that in this situation those who move such resolutions against Israel would only “need to … point to the statements that have been made saying there is no process”.
Mr Obama reminded Israelis that up until this point the US had “pushed away against European efforts for example, or other efforts. Because we’ve said, the only way this gets resolved is if the two parties work together,” he said, referring to European moves to unilaterally recognise of a Palestinian state.
The US president argued that a two-state solution was also needed to strengthen Israel.
“If, in fact, we want a Jewish homeland and a Jewish democracy, then this issue of the Palestinian people has to be resolved,” he said.
Mr Obama noted that later Mr Netanyahu distanced himself from the statement and agreed to look into “the possibility of a Palestinian state”.
But even this suggestion “has so many caveats, so many conditions, that it is not realistic to think that those conditions would be met any time in the near future,” he said.
“So the danger here is that…Israel as a whole loses credibility. Already the international community does not believe that Israel is serious about a two-state solution…the statement the Prime Minister made compounded that…belief that there’s not a commitment there.”
President Obama said Mr Netanyahu “has (also) been sceptical about the capacity of Israelis and Palestinians to come together on behalf of peace. I think that he is also a politician, who’s concerned about keeping coalitions together and maintaining his office.”

The US president’s relations with the Israeli prime minister were never very cordial but it worsened this fall when Mr Netanyahu addressed the US Congress and spoke against Mr Obama’s efforts to conclude a nuclear deal with Iran.