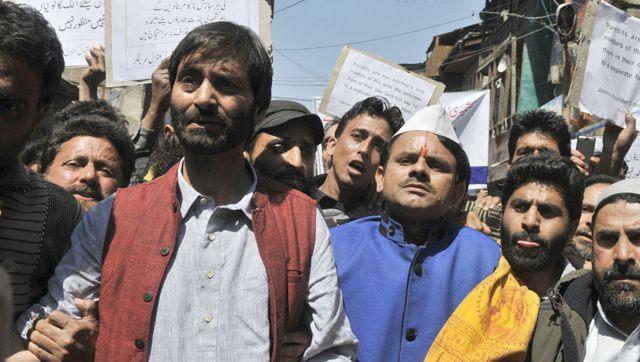 SRINAGAR: Kashmiri freedom movement leader Yasin Malik has been released from Srinagar central jail, Hindustan Times reported.
Yasin – who heads the Jammu and Kashmir Liberation Front (JKLF) – had earlier been moved to the central jail in Srinagar from JIC Hamhaama. He was being kept in solitary detention at the JIC, due to which his health deteriorated sharply.
On October 23, 2016, Yasin was admitted into the intensive care unit (ICU) of the Sher-e-Kashmir Medical Institute in Srinagar after his left arm ceased to function. They added that his wife, Mishal Malik, also fell unconscious upon learning of her husband’s health and was also receiving medical treatment.
Yasin had been suffering from various diseases and doctors had repeatedly advised authorities to shift him to a better place with adequate medical facilities. Despite their recommendations, the JKLF chairman was still kept in solitary confinement by the Indian government.
The JKLF chief was arrested by Indian forces from his residence after Burhan Wani, a young Kashmiri separatist, was killed on July 8, 2016.
Earlier, Azad Jammu and Kashmir Prime Minister Farooq Haider had appealed to United Nations chief Ban Ki-moon to help secure the release of the detained Hurriyat leader.
In a letter written to the UN secretary general, Haider had appealed Ban Ki-moon to pressurise the Indian government to free Malik. “Keeping the deteriorating health condition of Malik in view, it is necessary to release him for the medical check-up and any further delay may put his life at risk,” the premier’s letter said.