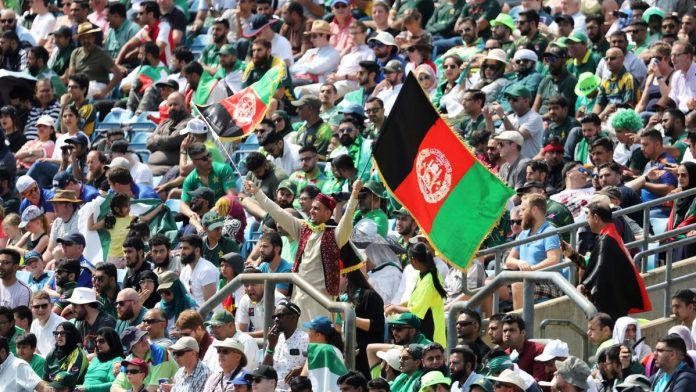 LEEDS: The International Cricket Council (ICC) issued a statement on the scuffle between Afghanistan-Pakistan fans during the match on Saturday and said they will take the appropriate action against the anti-social elements and ensure the security of the venue.
“We’re aware of scuffles among a minority of fans and are currently working with venue security team and local police to ensure there’re no further incidents. We don’t condone such behaviour and will take action against anti-social behaviour that spoils the enjoyment for majority of fans,” ICC said in a statement.
Earlier, “A fight broke out between Pakistan and Afghanistan fans in Leeds after a plane was flown over the stadium which had Balochistan slogans. Apparently, it was an unauthorised plane that flew over the stadium and political messages were hung from the plane which was visible. Leeds air traffic will now investigate the matter,” the ICC source said.
Pakistan went past England to get to the fourth spot in the tournament standings as they defeated Afghanistan by three wickets in a thrilling encounter.
Pakistan has now moved to the fourth spot with nine points. The team’s win has now created more pressure on England to register a positive result in the match against India. If England fails to do so, their chances of qualifying for semis would become very tough.
Afghanistan next takes on West Indies on July 4 whereas Pakistan will face Bangladesh on July 5.