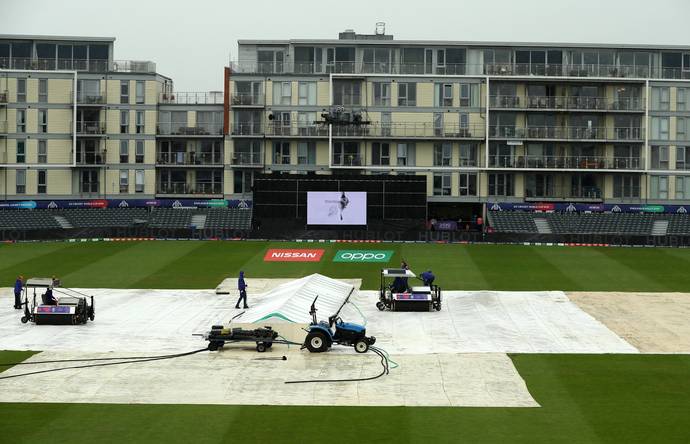 BRISTOL: Rain delayed the start of the World Cup match between Pakistan and Sri Lanka in Bristol.
With the square covered and rain still falling, the toss did not take place at the scheduled time of 10:00 BST. Further rain is expected throughout the day.
Both teams have won one and lost one game in the tournament.
Pakistan beat pre-tournament favourites England by 14 runs at Trent Bridge on Monday.
After a tame defeat to West Indies, Pakistan stunned England in the second match it played in the ongoing World Cup.
Sri Lanka has had a shaky start to the World Cup, but captain Dimuth Karunaratne expressed optimism on Thursday.
The triumph in 1996 is Sri Lanka’s greatest achievement in sports. No one had given it a chance to win the cricket World Cup, but Arjuna Ranatunga’s side took the world by storm Unfancied Sri Lanka’s greatest sporting achievement
Wahab Riaz has reignited his love affair with World Cups by delivering a crucial spell that helped Pakistan wrest control of a close contest against England at Trent Bridge and go on to win the match by 14 runs.
Hasan Ali said Pakistan coach Mickey Arthur’s ongoing faith in the side was behind a stunning reversal of fortune that saw the team end a long losing streak with a superb World Cup win over England.
Pakistan coach Mickey Arthur has urged his team to “stay ruthless” at the World Cup as it looks forward to neutralise the Sri Lankan challenge after a hard-fought victory over England.
The notoriously unpredictable Pakistan side held its nerve to beat the host by 14 runs at Trent Bridge on Monday, just three days after crashing to a seven-wicket defeat against West Indies at the same venue.
That ended a sequence of 11 consecutive defeats for the team, in completed one-day internationals.
Arthur praised his team’s resolve after a “shocking” defeat in their tournament opener.
“It was just so good to see us go out and play with the belief and intensity that we had spoken about,” Arthur told AFP.
“When we put all three disciplines together we know we can beat anybody. We now need to stay consistent and ruthless.”
Pakistan posted an impressive 348-8 against a potent England bowling attack, with fifties from veteran Mohammad Hafeez, Babar Azam and Sarfaraz Ahmed.
Pacers Wahab Riaz and Mohammad Amir, and leg-spinner Shadab Khan, took the wickets to restrict England to 334-9 in their 50 overs.
“You could see the hunger, the determination and the resolve to do well in batting after a horror show and then the bowlers fought hard, so we need to repeat that in the coming matches as well,” said Arthur.
Pakistan has won all seven of their World Cup matches against Sri Lanka dating back to the first tournament in 1975.
Pakistan will be tempted to bring in fast bowler Mohammad Hasnain for his raw pace, something that New Zealand exploited against Sri Lanka during its 10-wicket rout of their opponent in Cardiff on Saturday.
On Tuesday, Sri Lanka beat Afghanistan in a rain-shortened match, also in Cardiff, to breathe life into its campaign.
But the 1996 champion will be wary of another middle-order batting collapse after it lost five wickets for 14 runs against New Zealand and seven wickets for 36 runs against Afghanistan.
Sri Lanka coach Chandika Hathurusingha said he had told his batsmen to up their game.
“I don’t give pep talks. I give honest talk, that’s all.”
“I tell them what has to be done. They have to come and perform,” said Hathurusingha, who praised opener Kusal Perera for his 78-run knock, which helped Sri Lanka reach 201 against Afghanistan.
“He’s an amazing player,” said Hathurusingha. “We have given him the full licence to bat the way he wants to bat. We know that when he’s come up, most of the time it’s match-winning.”
But one factor outside anybody’s control is the weather, with persistent rain forecast for Bristol on Friday. …Agencies